The Joy of Sin

Reverend Dr. Cheri DiNovo C.M. was the guest on  the November episode of The Fine Print –  an online conversation series with contemporary feminist authors. Hearing DiNovo speak truth to power ended the 2021 season on a note of hope, joy and resilience.

“We’re all joyously fallible, traumatized, wanting humans,” writes DiNovo in the epilogue of her compelling memoir, The Queer Evangelist. “If we are loved by anyone and love anyone, our lives include holiness,” said the former politician turned radical reverend. ‘The joy of sin’ is how she prefers to reference the mantra ‘progress not perfection’.

DiNovo understands progress. During her tenure representing Parkdale-High Park in the Legislative Assembly on Ontario she passed into law more pro-LGBTQ2+ legislation than anyone in Canadian history, including Toby’s Act which added trans rights to the Ontario Human Rights Code in 2012, the Affirming Sexual Orientation and Gender Identity Act which banned conversion therapy for LGBTQ2+ youth in 2015, Cy and Ruby’s Act which established parent equality for LGBTQ2+ parents in 2015, and the Trans Day of Remembrance Act in 2017.

“I hope this book can be seen as something of a manual for how, in spite of our ‘messiness’, we can be change agents.”

The memoir is a brutally honest tale of how a queer teen who was addicted to meth and left home at the age of fifteen went on to get elected to provincial office, change laws and save lives.

From her lived experiences activism and politics, DiNovo learned that reform and revolution aren’t contradictory. We’re living in a time when reforms are happening all around us. Anti-Black racism, reaction to the climate crisis, Indigenous rail blockades, to name only a few. Revolution, on the other hand, is a loftier goal. And it’s unlikely the reforms we’re seeing today—critical as they are—will upend capitalism and displace a system that is designed for people, not profit. But DiNovo will take what she can get. “Like the tale on one woman’s life, reforms are not nothing. Reforms are crucial. Reforms change lives as they are lived now, not in some utopian future,” she writes.

Working with the Enemy

The Queer Evangelist includes the full text of a sermon DiNovo gave when she first started at Trinity St-Paul’s. The text is based on the Beatitudes and aims to shed light on the ‘hate your enemies’ mindset. She also used the sermon to help explain her move out of politics and to help those who find church as a whole, incomprehensible.

“But I say to you that listen, love your enemies, do good to those who hate you, bless those who curse you. Pray for those who abuse you,” DiNovo preached.

“If anyone strikes you on the cheek, offer the other also; and from anyone who takes away your coat do not withhold even your shirt. Give to everyone who begs from you; and if anyone takes away your goods, do not ask for them again. Do to others as you would have them do to you.” (Luke 6: 27-31)

Those with nothing left to lose.

“If we’re going to have differences of opinion and ideological debate in our governments, then we better learn to work with somebody who doesn’t always agree with us,” said DiNovo. “And so I did. And that’s how I got a lot done.”

She learned to respect people who had integrity and principles, no matter their political persuasion. She sought out people she could work with from the other parties and got most of the bills passed as tri-party bills. Eventually she became known as the tri-party bill queen. Further testament to befriending the enemy is the fact that Kathleen Wynne wrote the foreward to the book. After one of the worst smear campaigns that was hurtful and attacked her past and her family, the former Liberal Premier wrote: “Cheri’s telling of the story of that campaign is chilling for me to read as it lays bare the worst of the political process—a personal smear campaign. It was my party that would have supported, if not initiated, the campaign. But more than that, as an openly lesbian candidate, I have lived through my own personal smear campaigns. They are exhausting. They damage families ad they damage democracy.”

Just Do the Impossible

In our time of ongoing uncertainty about our environmental future and political divide, DiNovo uses the phrase ‘Do the impossible’ as a guiding principle in her life and work. She was inspired by this piece: graffiti is from Paris, France in the late 1960s when students protested the closure of the Sorbonne.

The idea resonated strongly enough that she used it as the title of the book’s epilogue: Just Do the Impossible.

Because if you’ve got nothing to lose, why wouldn’t you do the impossible? Or at least give it a try.

The Queer Evangelist is DiNovo’s second book. It was shortlisted for the Speaker’s Book Award, Legislative Assembly of Ontario 2021.

She was the featured guest in November 2021, on The Fine Print, a conversation series with contemporary feminist authors hosted and produced by Lana Pesch in the Feminist Enterprise Commons (FEC). Watch the video highlights of the conversation here on YouTube. 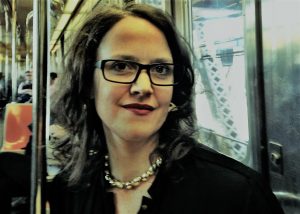 Steal Our Feminism, But Admit It

Sadly, what happened to Hepburn in this instance is not unusual. Women’s contributions are all too often “accidently” erased from history.

Creating informed and inspirational content to support feminist changemaking takes hundreds of hours each month. If you find value and nourishment here, please consider becoming a donor subscriber or patron at a level of your choosing. Priced between a cup of coffee or one take out salad per month.
<< PreviousState of the Art: Making Room and Income for Women in Art
Next >>Rabble Round Up