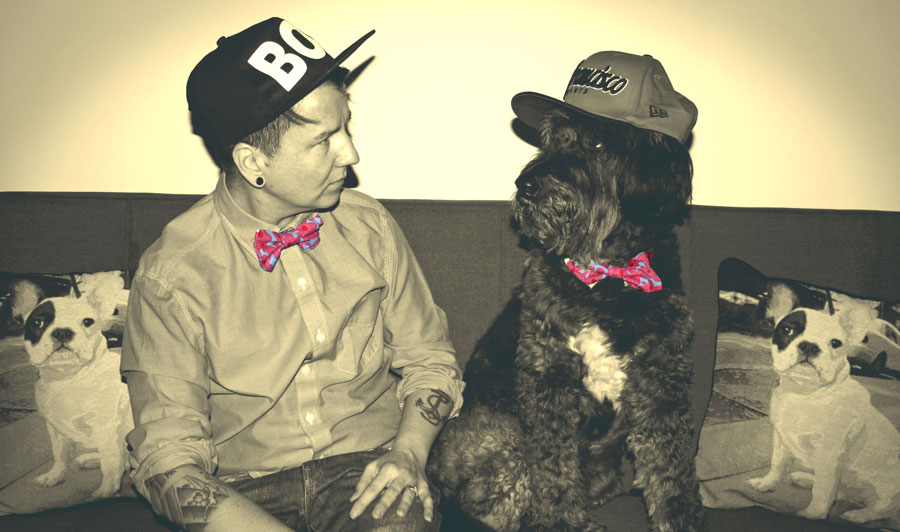 Few could say they found their identity as an entrepreneur more than Jack Jackson. Jackson, who was transitioning to a gender identity that embraces both masculine and feminine, grew frustrated trying to find clothes to match that sense of self. “I tended to shop in the men’s section but ended up having to get them altered to fit my body,” says the 42 year old. “It was really expensive.”

Jackson had also recently moved to Toronto from Guernsey in the Channel Islands, was awaiting a visa to work in Canada and searching for a way to earn a living. Returning to a former career in finance administration was off the table. “I did not want to go back to a corporate job wearing a suit that felt stupid or being treated as female.”

Frustration on both fashion and financial fronts prompted Jackson to buy a used sewing machine to alter clothes. “But I had never touched a sewing machine before and it was more difficult than I thought!”

Trying to sew something simpler — a bow tie — not only sprang Jackson from the binary cage but into a new career as a fashion entrepreneur with the creation of alljackedup, a startup that creates funky bowties that enable wearers to express their unique identity in classy contrarian style. Jackson launched in time to make a splash at World Pride in Toronto in June 2014 and incorporated the company five months later in November.

The ties became a hit with gender nonconformists — gays, lesbians, trans, gender queer, as well as folks who love androgynous style. Jackson’s creation also inspired a campaign for public awareness — Bow Tie Fridays, now Ties to Love — which encourages everyone to sport the dapper look on Fridays to show their support for the transgendered community. When Toronto Mayor John Tory and Police Chief Mark Saunders each tied one to express their support, alljackedup enjoyed its first big media attention, garnering press in Toronto’s dailies.

Jackson, who uses the third-person plural pronoun “they” to refer to themself, was suddenly working 17-hour days as a one-person production line and sales force. To make up for a lack of business experience, Jackson took Shopify seminars to learn how to set up an online store, which included building a website, marketing plan and social media strategies.

That led to another free entrepreneur skills-building session — the three-day Making Shit Happen Hackathon, which offered 20 entrepreneurs taking the course one-on-one consultations with about 15 consultants. Jackson laughs, “I learned that I really had to sort my shit out.” They worked with socially progressive consultants to develop websites, social media marketing, packaging, branding, and business plans. Volunteer start-up mentor Petra Kassun-Mutch of Eve-volution pushed Jackson “to go through everything I hadn’t thought through,” such as costing, production goals, and budgets. “I worked through how many bow ties I needed to sell a month to make the kind of money I needed to make. It was a big wake up call. I realized I wouldn’t make money just having an online store. I had to pitch to independent and international stores. And I had to outsource production.”

Jackson also took photography courses to learn how to take product pictures and hired a professional to do fashion shots for the website. “Friends told me to take the pictures myself and get cheap packaging, but I wanted to create an impression with a strong brand image.” To expand the line to include self-ties and more fabric choices, Jackson took sewing courses with The Make Den Sewing Studio.

But shortly after launching, Jackson’s transition to trans-preneur came off the rails when Jackson’s wife (they met on a lesbian cruise), left. Jackson believes she was unable to deal with her family’s reaction to Jackson’s gender transition. The split left Jackson devastated, both emotionally and financially. The two had been planning to buy a house. And Jackson had been working flat out building alljackedup, though revenues weren’t exactly flooding in yet. “It was awful,” Jackson says now. “I didn’t know if I could even stay in Canada. I couldn’t go back to Guernsey. It’s a very conservative place and my body had changed. I had changed. I went from being secure to worrying I might end up homeless. I found it really difficult to work for a few months.”

But alljackedup also gave Jackson a sense of purpose, to get back to work building the company. “The split fueled me to work even harder and to be a success.”  That dark period also inspired Jackson to create a unique marketing campaign  — Ties to Community — that supports trans communities and raises awareness of issues that trans people face. “Losing family support is unfortunately all to common when people transition and that’s one of the many contributing factors to the appalling suicide statistics, particularly among trans youth.”

Jackson recently teamed up with Egale — a Canadian organization that fights for equality of gays and lesbians everywhere — to promote the campaign, which saw alljackedup donate 50 percent of its sales during Trans Awareness Week culminating in Transgender Day of Remembrance on November 20. “It’s important for me to give back and it’s important for my business. I don’t do tremendously well promoting myself. I don’t like drawing attention to myself. I want to draw attention to trans issues but I don’t want to be the spokesperson. ” By partnering with the charity, Jackson can leverage its marketing and media reach while promoting alljackedup to the trans community and those who want to show their support.

And many have. Toronto-area band Walk off The Earth, who reach tens of millions of Youtube viewers with their music videos, publicly supported the Ties to Community campaign. “They’re a mainstream band,” says Jackson. “I thought it would be a big risk for them, but they got so much support for it. Now is the time to be supporting trans rights.”

All this attention has alljackedup’s CEO working until midnights, trying to fill orders for the website, independent retailers, craft shows and holiday “pink” markets such as Toronto’s 519 Community Centre. That puts Jackson in the all-too-familiar bind of many startups — too small to hire for expansion yet too consumed by doing “it all” to expand enough to hire help. Jackson currently designs and makes all the ties — 20 minutes for a pre-tied and up to an hour for a self tie —  out of their condo and also does triple duty as marketer and packager of the $30 to $80 ties, which come in a range of fabrics.

Says Jackson: “I know I need to make changes.” But doing so requires time and money, both in short supply. “That’s the toughest part of being an entrepreneur. I have to reach out and pitch to people but I don’t know how to do that or find the time to do it,” says Jackson. “To be honest, I’m in a very precarious spot financially right now.”

But the struggle, Jackson says, is worth it. “The best part of being an entrepreneur is that I can set my own hours. I love waking up in the morning and can’t wait to see what’s coming through (for orders). I love meeting different people who have the same kind of interests. I love that I can wear what I want and, in the end answer to myself, though sometimes that’s difficult, the self doubt. But I love being able to be creative. I wake up at 3 a.m. with ideas. It consumes you and I love that. I know I’m doing something that I’m good at and there’s a need for queer fashion and we need people catering to the queer community where people can feel safe.”

Creating informed and inspirational content to support feminist changemaking takes hundreds of hours each month. If you find value and nourishment here, please consider becoming a donor subscriber or patron at a level of your choosing. Priced between a cup of coffee or one take out salad per month.
<< PreviousThe Renascent Entrepreneur: Second Acts
Next >>7 Stages of Entrepreneurship Guide By Kiki Schirr's

Margaret is an accomplished writer and journalist, and is LiisBeth’s version of “Lou Grant.” She cracks the editorial whip—hard (and we like it!). Margaret has been nominated and awarded for her feature articles, which have been published in leading magazines and newspapers including Sports Illustrated Women, Report on Business, More, Canadian Geographic, Toronto Life, University of Toronto Magazine, Saturday Night, Flare, Cottage Life, enRoute, Homemakers, Equinox, Chatelaine, etc. She is also the recipient of a number of fellowships including an Atkinson Foundation grant, two Canadian Institutes of Health Research grants, and a residency at the Banff Centre for the Arts Literary Journalism Program.

Margaret is an accomplished writer and journalist, and is LiisBeth’s version of “Lou Grant.” She cracks the editorial whip—hard (and we like it!). Margaret has been nominated and awarded for her feature articles, which have been published in leading magazines and newspapers including Sports Illustrated Women, Report on Business, More, Canadian Geographic, Toronto Life, University of Toronto Magazine, Saturday Night, Flare, Cottage Life, enRoute, Homemakers, Equinox, Chatelaine, etc. She is also the recipient of a number of fellowships including an Atkinson Foundation grant, two Canadian Institutes of Health Research grants, and a residency at the Banff Centre for the Arts Literary Journalism Program.