In 1986, when then Soviet Union president Mikhail Gorbachev allowed citizens to become private entrepreneurs, Svetlana Ratnikova lined up at 4 in the morning to register her first business selling car seat covers. “I was one of the first female entrepreneurs in Moscow in Russia,” says the now-52-year-old who immigrated to Canada in 1994 and shifted gears to become a social-impact entrepreneur.

Flash forward to over three decades later, Ratnikova is now the founder and CEO of Immigrant Women in Business (IWB), a network of female entrepreneurs whose mandate is to support and mentor other up-and-coming female immigrant entrepreneurs.

Founded in 2017, the nonprofit now boasts 75 founding members who pay a sustaining membership of $2,500 [NS1] and hundreds of members paying $29.70 or $49.70 a month (depending on their membership tier)[NS2] . The group is highly diverse, with more than 75 countries around the world represented and members working in a variety of fields, from pharmaceuticals sales to public speaking and coaching. Anywhere from 50 to 80 people routinely attend their events: four networking mixers and four educational seminars every month. Their annual International Women’s Day events draws hundreds of women for a day of celebration and networking.

IWB also provides micro-loans to help immigrant start-ups launch and connects new Canadians with mentors. Typically, these mentors are founding members of IWB, who all have experience in their fields and a vested interest in the success of immigrant women. They guide their mentees in everything and anything needed to thrive as a business owner—from leadership skills, to public speaking, to online marketing.

Maria Carolina Ojeda, who recently became a founding member, describes how her early encounters with IWB helped her relaunch and grow her business.  At a one-on-one meeting to discuss her business strategy, Ratnikova immediately pinpointed a crucial aspect of Ojeda’s cleaning service that wasn’t working out. “[Ratnikova] went over all of my social media, like all of them,” recalls Ojeda. “And then she started telling me, ‘Okay, what you need to do is to get more exposure.’” Ojeda updated her social media profiles with help from Ratnikova and other IWB members, which she credits for her company’s growth—Ratnikova then helped Ojeda access co-op students to hire as administrative assistants to help handle her new clients.

The idea to start IWB came to Ratnikova when she noticed it was hard to find mentors and connections who understood her experiences and goals. She felt she never fit in at networking events, even those for women. They couldn’t relate to her struggles or her successes. “There’s a different type of thinking between people who were born in this country and people who are immigrants,” she says. “When I talk to immigrants, we talk like sisters, because we have similar experiences. They already are risk takers, just like me.”

Jacqueline Dixon, one of IWB’s founding members, agrees. “[The experience of being an immigrant] is what binds us together in such a strong way,” she says. “The fact that we’re able to see each other for who we really are, and identify that women, regardless of their cultural background, face a lot of the same obstacles.”

The women in IWB don’t specifically talk about feminism or use the word “feminist;” their goal is female empowerment, to lift each other up and create a space for immigrant women to thrive. They don’t need (or necessarily want) to put a label on the work they do. Ratnikova [NS3] says a lot of them believe it is a privilege to be an entrepreneur. “People always say, ‘Oh, immigrants that come to this country, poor them.’ No, we are actually very fortunate, because this country gives us the chance to be who we are.”

Events and meetings are raucous and energetic, just like the members themselves. Given the group’s diversity, conflicting opinions and heated discussions can arise but IWB members are committed to looking beyond differences and focusing on what they share. This commitment to bonding over similarities has created a supportive network of women ready to help at every turn, in any way that they can. They all understand, and can sympathize with, what it’s like to be a newcomer.

“You’ll never get it until you’ve made that step yourself and went to this country without money, without friends, without any network, when you don’t speak a word of English and you have to make it,” Ratnikova emphasizes. “That experience makes you a different human being.”

Conversations at events and within the group itself centre around getting to know each other very well. Questions about culture, goals, next steps, barriers to success, and risk-taking dominate discussions at IWB meetings. These “really deep questions,” says Dixon, is what leads to finding commonalities and forging relationships and a support system that’s personalized for a member’s needs.

Ratnikova believes the relationships that these women build with one another are integral to businesses in general but especially important to new Canadians who might otherwise face barriers in making critical connections. Dixon agrees: It’s all about “enabling them to build skill sets and networks that will allow them to survive.” There’s an understanding between members that when you move to a new country, you don’t know anyone, don’t speak the language and just need a little support to get you up and running.

After every new person at the speed networking event I attended introduced themselves, Ratnikova asked the speaker this simple yet moving question: “How can we support you?” And, though I was there to research this article, members at the Zoom event welcomed me with open arms, insisting I send them my previous work to pass along to anyone who might be looking for writers. In just my first encounter with IWB, the support and enthusiasm was overwhelming.

Perhaps the reason the group is so successful is because of the great love and respect these women have for one another—enough to share with anyone new who stumbles into an IWB event. “It’s really a sisterhood of women with way too much energy,” says Dixon. “There’s just this real wonderful love. You cannot leave an IWB meeting not pumped up and ready to conquer whatever obstacles are in front of you.” 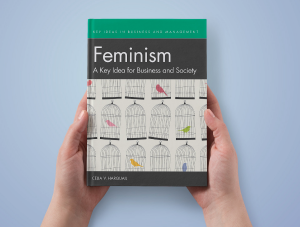 Feminism: A Key Idea for Business and Society

CV Harquail’s opinionated book is jam-packed with practical ideas about why feminism needs to be taken seriously by the business world.

Creating informed and inspirational content to support feminist changemaking takes hundreds of hours each month. If you find value and nourishment here, please consider becoming a donor subscriber or patron at a level of your choosing. Priced between a cup of coffee or one take out salad per month.
<< PreviousHow to Govern Like a Feminist
Next >>Sticking it to Sexism in Gaming

Rebecca Gao (she/her) is a Toronto-based journalist interested in all things climate, food and late-aughts teen movies. In her spare time, she can be found baking (or at least trying to). Her writing can be found in publications like Chatelaine, FLARE, VICE, Reader's Digest and more. To learn more about Rebecca, visit her website https://rebeccagao.ca/

Rebecca Gao (she/her) is a Toronto-based journalist interested in all things climate, food and late-aughts teen movies. In her spare time, she can be found baking (or at least trying to). Her writing can be found in publications like Chatelaine, FLARE, VICE, Reader's Digest and more. To learn more about Rebecca, visit her website https://rebeccagao.ca/