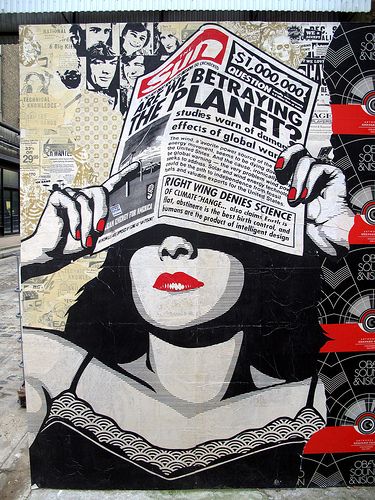 Wow, what a week.

With so much in the news about POTUS (President of the United States) Trump’s extreme behaviours and astonishing executive orders this past week, combined with the horrific Quebec mosque attack, it is easy to believe we are all sharing a bad dream. If you add to that the fact that the Globe and Mail still publishes Margaret Wente’s shock jock journalism, including her Jan. 28 piece telling women to check their privilege, we could justifiably call it a full-fledged nightmare.

But not so fast. There is hope in the promise of resistance.

The phrase “Resistance is futile” is a well known to Borg-loving Star Trek fans, and perhaps even the universe beyond. But here on earth, resistance, especially passionate resistance, is fertile. History tells us time and time again, that it feeds, energizes and gives life to overdue social change.

History also shows us that thoughtful stewardship of our collective resistance energy over time is the key to achieving our desired change. With an inclusive and ecosystem approach, it can raise the roof on civic engagement and incite the otherwise complacent to swell with concern and transform into potent community leaders, or better yet, run for and be elected to public office. Civil resistance works.  Especially when women get really pissed off; consider the 1789 Women’s March on Versailles? But it has to run deep and long if it is going to have an impact.

Resistance can also take many forms—some large, some small—but they all add up. This can include writing an op-ed, calling out unacceptable behaviour at work or on the subway, tattooing a slogan on your body to forge personal commitment to a cause (Yes, I know someone who did this), helping to organize a march, demonstrating, publishing a book, blogging, spending your money differently, and hosting a salon for local influencers.  Although you may not typically consider this, resistance can even take the form of initiating a new enterprise or organization.

Enter the Age of the Activist (Resistance) Entrepreneur

Activist entrepreneurs are not new. But they are rarely included in discussions about entrepreneurship, and there are certainly no incubators or accelerators in Canada dedicated to this genre. It is easy to see why.

Activist entrepreneurs design enterprises or organizations whose core purpose is to challenge norms, re-write laws, hold governments and misbehaving corporations accountable, conduct research, work to change the narrative, make the invisible visible, educate, and enable challenging conversations. The fact is, those who do well under the current system are unlikely to spend time let alone money challenging a system that works well for them. The fact that activism tends to repel financial investors or careerists makes activist entrepreneurs a poor fit for most startup incubator programs.

But still, they rise.

Some examples of activist entrepreneurial ventures include Rabble.ca  (a media enterprise), the Transition Towns Network (a process innovation), and Idle No More (a grassroots movement). All three were founded in part, or entirely by women.

Rabble.ca, an indie, alternative online news magazine, and now a nonprofit venture, set out to combine activism with journalism and counter the status quo. Rabble.ca was founded in 2001 by women’s rights activist Judy Rebick with support from internet activist Mark Surman, novelist Judy MacDonald, plus well known Canadian activists, including Stephen Lewis and David Suzuki. The site launched by raising $120,000 from the Atkinson Foundation (a Toronto-based foundation focused on social and economic justice) and $80,000 from unions and prominent Canadians. Today the site reports that it averages 450,000 unique visitors per month. The site’s content is free of charge, and it generates revenues through advertising and reader contributions.

While Louise Rooney and Catherine Dunne were students of activist Rob Hopkins in the U.K. in 2004, they developed the Transition Towns concept. The Transition Network, further developed and popularized by Hopkins, helps communities move from oil dependence to local resilience. Today the network has more than 400 recognized member communities around the world and runs a thriving media enterprise, producing books and films sold worldwide.

These are but a few examples. We quickly could add more. Consider the SlutWalk movement (which went international), founded by Toronto’s Sonya Barnett and Heather Jarvis (how’s that for exporting?), or the recent 2017 Woman’s March, launched by Hawaiian retiree Theresa Shook. Shook simply put up a Facebook page and it took off–a classic hockey stick rise not dissimilar to the kinds of growth patterns we have seen with famous tech startups. Today the organizers are working on how to grow the movement post-march, and sustain it.  These examples are but a few. There are hundreds more.  We like to think LiisBeth, our little fledgling startup, is another.

Activist entrepreneurship is a distinct form of entrepreneurship. For starters, they are not sparked by commercial market opportunity; they are instead called to serve in response to a form of systems level injustice that they care deeply about. They need mentors with experience with organizing sustainable resistance or movements (veterans like David Suzuki, Judy Rebick), public interest lawyers versus corporate lawyers, plus expert guidance on how to raise and steward donated money, or how to design a grassroots transmedia campaign to publicize their story. But where will they go for this support?

Not likely mainstream incubators and accelerators.

To advance systems change, or deal with reactionary regimes, we need those who march, demonstrate, or run for office, but we also need activist entrepreneurs. If we want to see change, we must be prepared to support them by paying attention to them, engaging with them, sharing organization creation, leadership and governance expertise, helping them implement best practices, and, of course, seed them with a little cash.

Back in December, LiisBeth contributor Mai Nguyen said, “Have I got a story for you!”

Meet Halifax entrepreneur Katelyn Bourgoin whose startup journey involved crying and throwing up on the bathroom floor, followed by successfully raising $350,000. Whaat??? Yes, pretty impressive! So don’t miss her story on LiisBeth this week and find out more about her new service called “Squads”, an online community of women entrepreneurs who provide each other with objective criticism and feedback via video conferencing.

Also, we hope you enjoy the short Q & A with Sadaf Jamal, founder of Move’n Improve, about her experience attending the Women’s March in Washington D.C. with Moxie Trades CEO Marissa McTasney and her group. Jamal is pictured above–wearing a pink hijab.

Coming soon, a special feature for the month of love (February) by writer Sue Nador on sex-positive entrepreneur Judy K, majority co-owner of the upscale Toronto sex club Oasis Aqualounge. Nador says that researching the story certainly challenged many of her assumptions. Let’s see if the story ends up also challenging yours.

Well, you did it again! You made it to the end! And we really appreciate it! We know your time and attention is valuable, so we work hard to make worthwhile content. As always, if we can improve, tell us. And if we have done well, tell us that too!

We can also use your support in the form of a paid subscription.  Subscriptions options are $3/month, $7/month and $10/month. We accept Paypal and credit cards.  Funds go directly towards paying writers, editors, proofreaders, photo permissions, and illustrators.

The next newsletter is scheduled for Feb. 14. Valentine’s Day! In the meantime, keep resisting in your own way, take care of yourself and others. We need all LiisBethians, wherever you are in the world, to be strong for the long haul.