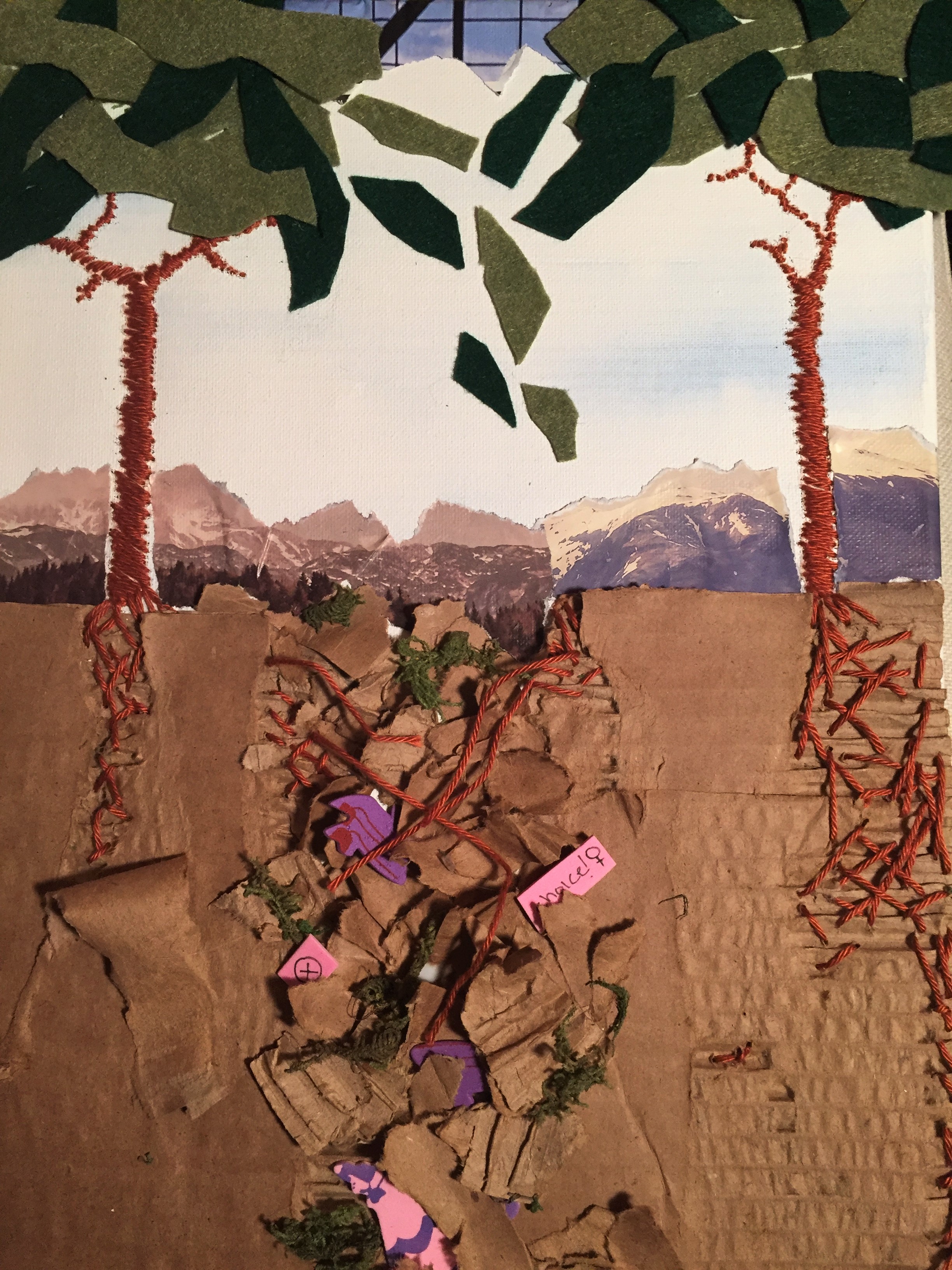 When I asked LiisBeth contributor Anne-Marie Hood about what inspired the art she created for this week’s newsletter cover (above), she replied “Unlike paint, the materials and method used to create this work (cardboard, paper, yarn, felt and foam), like our gains as women, are not designed to stand the test of time. Our ideas and ideals are as organic as any growing form. Without nourishment, even the strongest roots can collapse. The much longed for light in the darkness may be revealed for what it is: a mirrored reflection off an intact glass ceiling.”

During Prime Minister Trudeau’s first meeting with President Trump at the White House on Feb. 13 a new cross border initiative to advance women entrepreneurs was announced. As I followed the news about it, I could not help but think about Hood’s words and how they applied to this new women’s initiative.

A Spark of Light in the Darkness?

Initially, I was energized to hear that women entrepreneurs would be on the Prime Minister and President’s agenda for their first meeting. Could this be a seed for change that stands the test of time or would it be just another women’s policy tumbleweed? Soon after, and as more information came to light, the pleasant adrenal high subsided. Too many red flags.

One of the first things you learn in business is to get the name right. It’s a sign of respect. So what does it tell us when people keep messing up the stakeholders in the name of the newly appointed council?

It seems like no one really cared if the council was created to advance women entrepreneurs, women in the workplace, business leaders, or all three, as long as it said women somewhere in the title.  Not taking the time to carefully consider the named stakeholders for this initiative indicates that it was likely hastily and/or not well crafted and validates the view that this council was created to achieve pop up political goals. And given little has been announced since, it is starting to look more and more like a tumbleweed indeed.

What Does the Roster Tell Us? 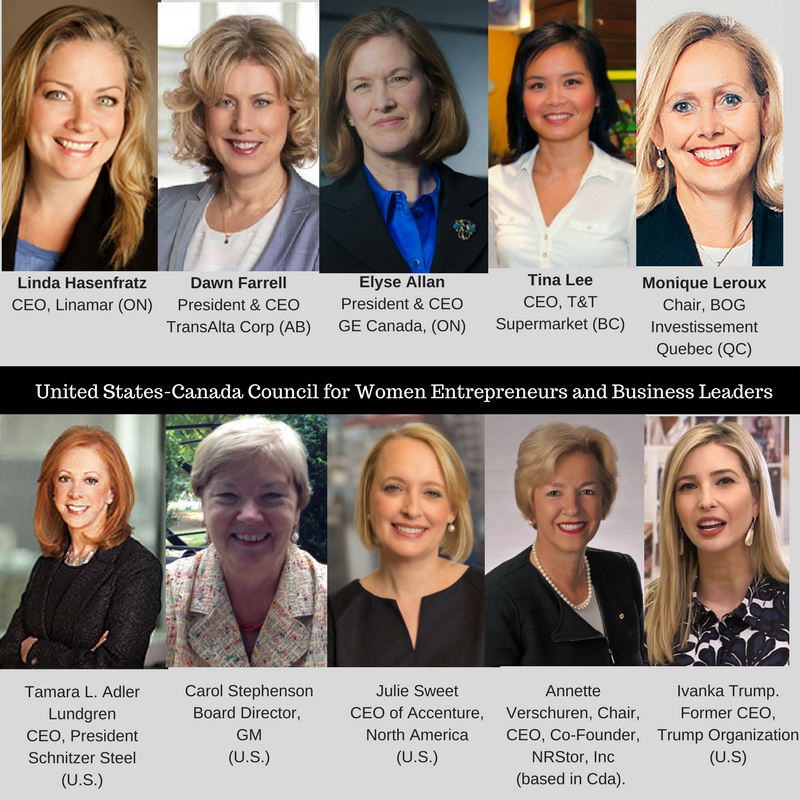 Diversity pundits argue that to best serve the market, one must employ the market. This is because socially diverse groups are more innovative than homogeneous groups, especially when it comes to solving complex problems. But ensuring optimal diversity on several levels when appointing the members of this council was evidently not a priority. For instance, there is only one person of colour on the council.

Furthermore, based on the internet bios available, it appears that none of the people designated to the Canadian seats (five out of ten) have ever been entrepreneurs. On the U.S. side, only two out of the five have founded or co-founded a company: Ivanka Trump and Canadian Annette Verschuren (we are not sure why a Canadian was listed as a member on the U.S. side)  even if both did so under profoundly privileged circumstances.

Also, all council members represent companies that are already exporting or importing from the U.S.

The makeup of the council indicates that the selection process prioritized large, well-established corporations with cross-border business interest or perhaps just familiar faces. It also shows that the government officials who organized this initiative see women entrepreneurs and corporate careerists as interchangeable constituencies with indistinguishable concerns. The thing is, they are not the same at all.

Women entrepreneurs and employed women experience the economy and work life very differently. For example, one takes personal financial risk and founds companies, the other works for companies. The former cares deeply about things like equitable access to venture capital, and the impact of small business tax rate hikes; the latter cares more about women’s representation on corporate boards and prospects for women’s career advancement. And while both may share experiences and concerns about sexism and gender-based discrimination, they have entirely different concerns and ergo priorities when it comes to directing policy.

Surely our talented MP Chrystia Freeland and Trudeau’s Chief of Staff Katie Telford could have found at least one smart, Canadian woman founder/entrepreneur who typifies the entrepreneurship experience to join the council, even on short notice.

No one yet knows what this council will do, or even can do. Some reports say its creation was simply based on political opportunism and its only impact will be symbolic in nature. In other words, it will amount to nothing more than a well-planned dodge. Other media outlets referred to it as a task force.

Of them all, the 2011 report is the most recent, comprehensive, large-scale collaborative effort led by a national and non-partisan consortium of prominent women business owners, service agencies, academics, and industry associations. Yet, as of 2017, 2011 Task Force Chair Barbara Orser reports that few of the recommendations, which not surprisingly are similar to recommendations of prior task forces, have been implemented.

And as Canada continues to delay implementing policies and supports that could be of tremendous value to women entrepreneurs and our economy, we also find ourselves falling behind globally. In a new book, The Routledge Companion to Global Female Entrepreneurship, to be published in April 2017, chapter contributor Barbara Orser cites compelling research that shows “while Canada is among leading nations with respect to gender equality as it pertains to employed females, this is not the case for policies to support women entrepreneurs.” In other words, in Canada, we do more for addressing equality issues for employed women that we do for women entrepreneurs.

Orser also argues in the book that one of the reasons for government indifference to the specific needs of Canadian women entrepreneurs is the lack of advocacy, an issue which was identified in 2003, and every task force since.

The questions raised by the creation of this council tell us that, like the other initiatives that came before it in which recommendations were not acted upon, perhaps we are just hurtling towards a light that is really just a mirrored reflection of Hood’s ever “intact glass ceiling”.  In other words, initiatives like these, including ones far more seriously contemplated, will likely continue to fail because they are set down in a society that has still not yet truly grappled with its deeply rooted cultural and social gender biases.

Nevertheless, on the positive side, the creation of the council is at least something, even if only a small seed tossed onto stoney ground.

And there is a way that we, LiisBethians, can help nourish this seed and increase the likelihood that this initiative can produce positive, lasting outcomes for women entrepreneurs.

Let’s take out our pens and write MP Chrystia Freeland,(Chrystia.Freeland@parl.gc.ca) plus the five Canadian members of the council to ask for their commitment to help implement the recommendations of prior task forces within the next few years. Their contact information can be found here.

But we better do it fast, because who knows if this Council will last for real beyond the day that it met. 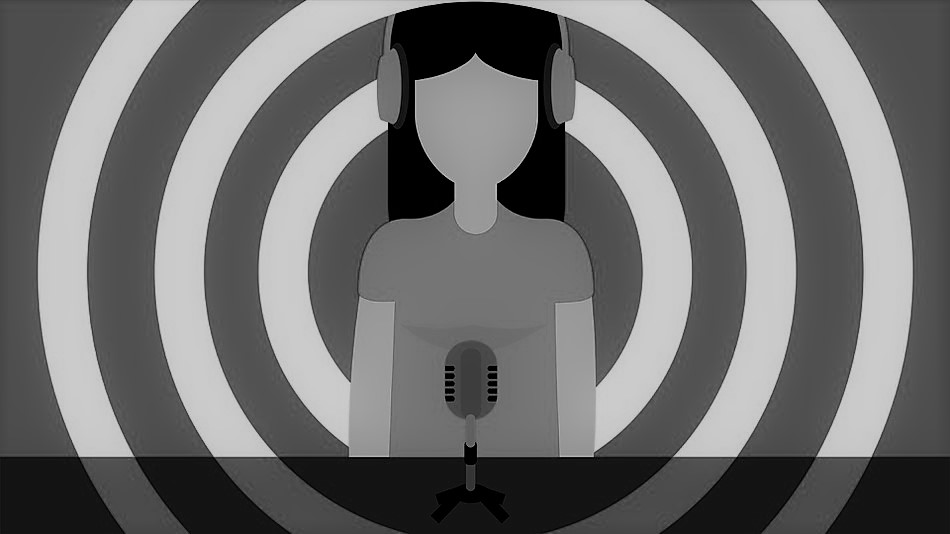 If you missed our presentation and panel at the Feminist Art Conference held on Saturday, Jan. 21, have no fear, a podcast of the entire presentation is now here!

In this 80-minute session, the panelists explored the intersections between gender, entrepreneurship and innovation and how gender shapes entrepreneurial choices, support, access to capital, and the overall experience. 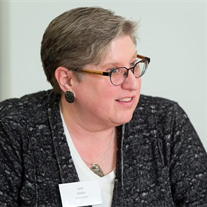 R.I.P Julie Rae Weeks: Last week, a leading advocate for women’s rights and entrepreneurship around the world, Julie R. Weeks died on Feb.18, 2017 at the age of 59 as the result of brain cancer. Julie served as Director of Research at the Center for Women’s Business Research in the U.S., Executive Director of the National Women’s Business Council, which advises the U.S. Congress, and Small Business  Advisor for the President of the United States. As President and CEO of Womenable, Julie’s national and international activism led her to board positions with: The Association of Women’s Business Centers, for which she served as chair; Enterprising Women Magazine; Global Banking Alliance for Women; International Council for Small Business; International Journal of Gender and Entrepreneurship; the National Association of Women Business Owners; and WEConnect International. She also served as a Strategic Advisor to Quantum Leaps.

Barbara Orser, a colleague and sometime co-author with Julie says “Julie Weeks was a visionary and connector. She was a thought leader who taught us that all nations must do more to support women’s social and economic rights. Womenable has played a critical role in connecting the global community of researchers, practitioners and policymakers. Her legacy is evidenced in many of the organizations that have made the U.S. a leader in supporting women entrepreneurship. She will be very, very missed.”

For information about her funeral, including webcam access view http://www.reynolds-jonkhoff.com/obituaries/Julie-Weeks/#!/Obituary 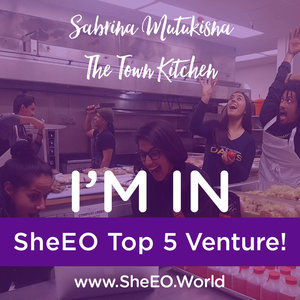 The 2017 slate of Canadian SheEOs will be announced at the SheEO gala in Toronto, Monday, March 6. 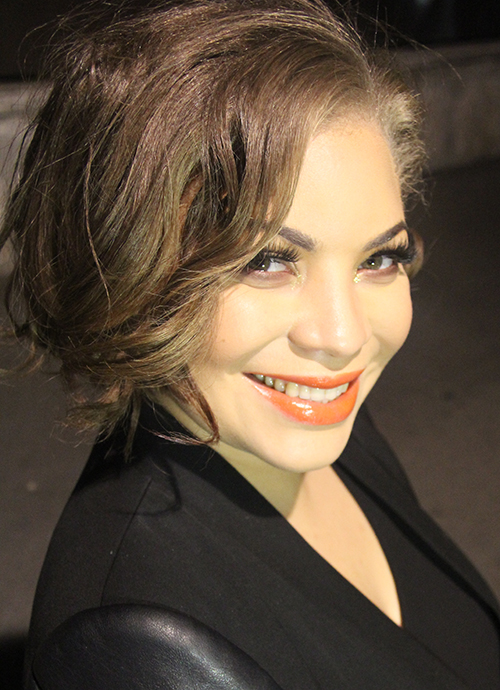 Astrid Pregel, the former head of WEConnect, has moved on to a position with WEConnect International. The corporate-led non-profit, facilitates inclusive and sustainable economic growth by empowering and connecting women business owners globally. It identifies, educates, registers, and certifies women’s business enterprises that are at least 51 per cent owned, managed, and controlled by one or more women. 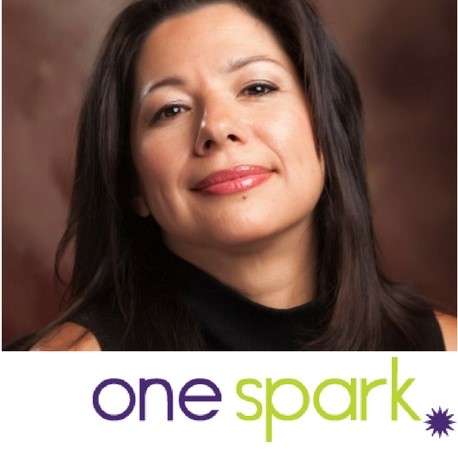 This week LiisBeth spoke with Yudit Timbo of One Spark, an organization based in Hamilton that provides barrier-free opportunities for women experiencing violence to generate income through entrepreneurship. To find out more visit their website here. 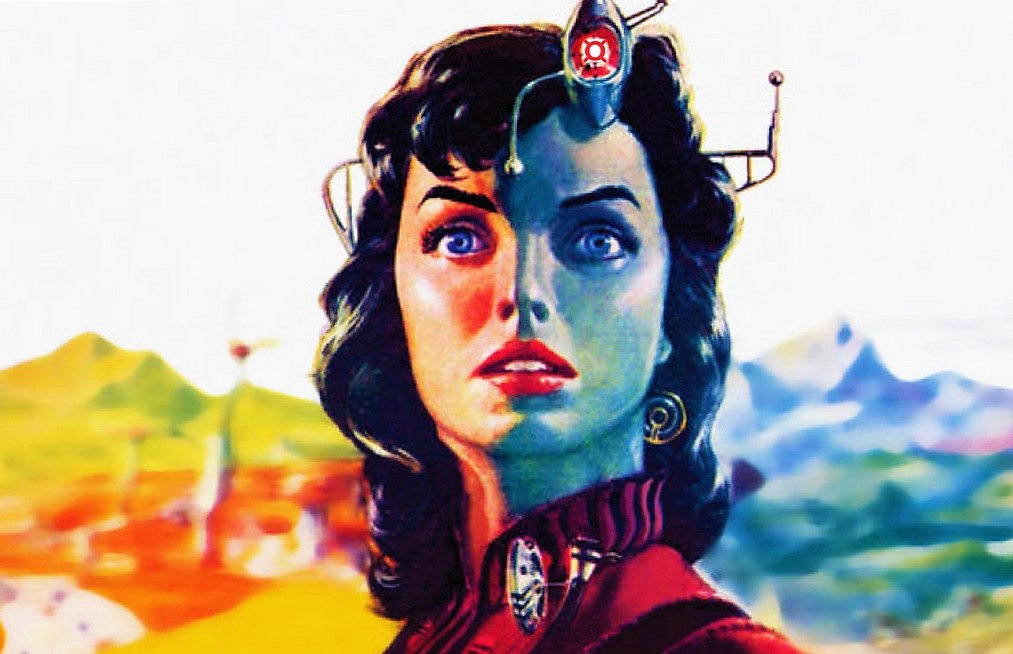 In addition, Statistics Canada released a report in November 2016 titled “A Comparison of the Performance of Majority Female-Owned and Majority Male-Owned Small and Medium-Sized Enterprises“. The study examined the impact of gender on enterprise performance for the years 2011 and 2014 on a handful of variables. The key finding? In 2014, women are just as innovative as males. Halleluja! Also, the study says banks today are treating women entrepreneurs looking for debt financing more equally than they did in 2011. This is progress?

What the study doesn’t look at is what percentage of total venture debt financing overall goes to majority-owned women firms in Canada. In her recent presentation in December in Ottawa, Dr. Candida Brush reported that in the U.S., only 4.4 per cent of the total dollars lent to small businesses went to women-led firms. In 2007, Statistics Canada found that “Majority female-owned firms were just as likely to seek to finance as majority male-owned firms in 2007 but were less likely to be approved for debt financing than majority male-owned firms.” So while women might no longer be paying more to fund their ventures than men, the study does not note what % of all lending goes to women.

As is the case with comparing statistics, the devil is in the methodology.

That’s it for this week! And if you are not already doing so, please consider increasing your support of what we do in the form of a paid subscription. Subscription options are $3/month, $7/month and $10/month. We accept PayPal and credit cards. Funds go directly towards paying writers, editors, proofreaders, photo permissions and illustrators.

The next newsletter is scheduled for March 14.