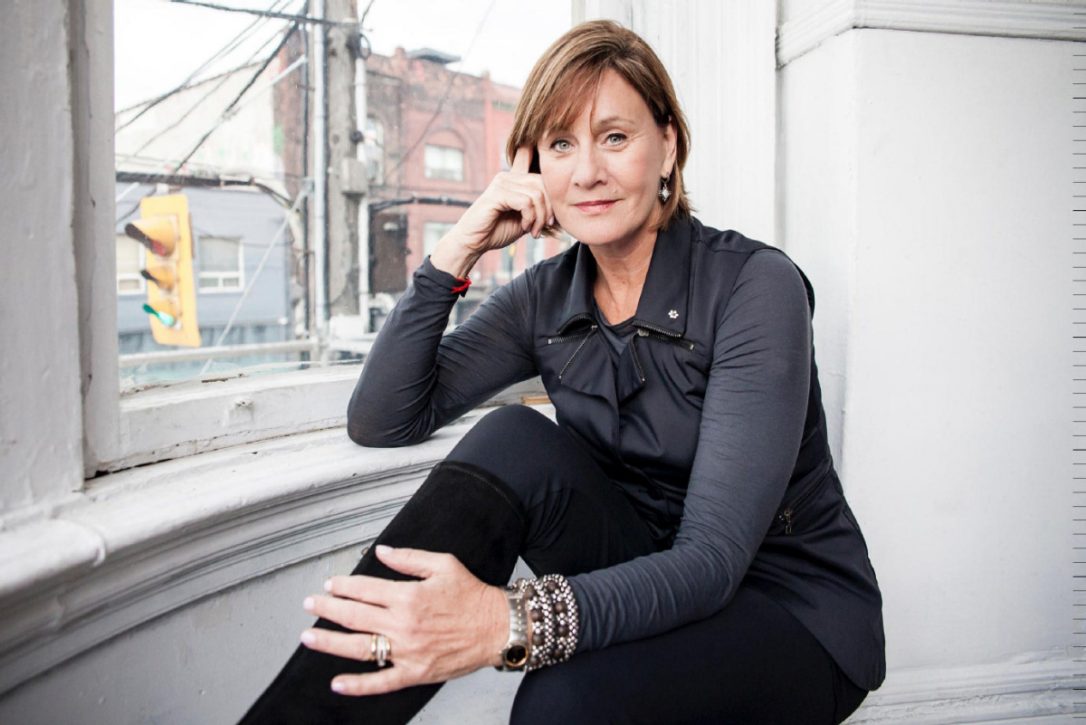 Thinking about a stocking stuffer for your favourite feminist? You can’t go wrong with Denise Donlon’s music industry insider memoir, As Fearless As Possible (Under the Circumstances), which recounts an enterprising career that saw her start a company promoting rock and roll bands, help invent the VJ position at MuchMusic, become the first female president of Sony Music and head up CBC English Radio.

In this LiisBeth Q&A, Donlon shares her thoughts on how to succeed in male-dominated business worlds, why being insecure can be a good thing (under some circumstances) and how looking back is helping her contemplate her next career move.

LiisBeth: I am quaking a bit at interviewing a master interviewer so let me start with this, what question would you ask yourself about this book?

Denise Donlon: Hmm, I’d what to know, what have you learned from writing this book?

DD: It’s a two part answer — beware of decisions that occur when you lead with your ego because, it started with, hey, you should write a book! And then when you get down to doing it…let’s say, I’ve always respected writers and now I’m in insane awe of them.

The second part is, many women are running as fast they can to balance everything in our lives. So we don’t have an opportunity to stop and reflect. If you’re facing a decision about moving forward, you need that perspective. So writing (this memoir) was understanding my career path…and I realized I was always trying to use power for good. So my next adventure will be how to use the experience I’ve gained and how to use it for the power of good.

LiisBeth: It seems you have had incredible entrepreneurial drive. You had your had own promotion company and MuchMusic was about inventing new shows, which entailed a lot of risk because if it didn’t work out, you would have likely lost your job…

DD: For a lot of us who like to embrace new challenges, you’re fraught with anxiety at the beginning. And once you find yourself on less shaky ground and start to bring value to the organization — and that’s hitting the bottom line — then I do think you get to colour outside the lines a little. Many of us find our meaning when we can say, what can I do to make things better — for people, for viewers or customers, for the institution I am working for? That’s very freeing.

LiisBeth: Do you think feminist entrepreneurs operate differently or have a different approach to things?

DD: I do actually. Many people who deny the word feminist think we already have gender parity, which we don’t. Young women have been told by optimistic parents, you can have it all. It’s well meaning but it’s slightly delusional because we can’t have it all yet. We’re not making as much money as men for doing the same work. It’s still a challenge to control our reproductive destiny. Especially with the recent election in America, we’re going to have to work hard…because hard-fought legislation can be repealed by a change in government.

The upside: There are more tools in terms of media, social media, electronic connectivity devices. There are more tools at hand now to communicate, to engage, to rally, to stand up for what we believe in and to find community. It’s a powerful time for women because we actually have tools at our disposal and we have to ensure we’re not all turning into feminist frogs in pots and saying, it’s okay, someone else will do it and then suddenly it’s over for frog.

There’s lots of opportunities for getting more women into power, in business, on boards. What, women on boards of Fortune 500 companies is just 5 percent? Justin Trudeau’s gender parity in cabinet, that was a huge step forward, because women in politics have hovered around the 20 percent mark for decades. That needle was stuck and it needs a bold move like that in order to unstick it. Without equal representation, men make decisions on behalf of women, from everything from reproductive rights to health care, day care, domestic violence. But we also need our voices at the table to ensure that all Canadians are running things like the economy and the environment and civil rights.

LiisBeth: And yet so many women who are successful in business refuse to call themselves a feminist.

DD: I get that it’s a heated word. We search for other words to replace it. But I think we really need to reclaim the F word. I wrote about this in the book, looking at what we did at MuchMusic in terms of media literacy back in the 90s, jamming on big issues like gender and sexuality. We asked audiences to participate in discussions, to unpack these images of women they were seeing in music videos, often misogynist, and to really try to understand why it was happening, to ask questions. Do we have to do this? Who’s making the decisions? Do women have the choice to be portrayed in the way they want to be? In 2015, many of the same images we were trying to deconstruct back then are still around and it’s depressing for me. It’s not about slut shaming. Wear what you want ladies, absolutely, but just make sure it’s what you want…. Here in North America, we need to stand up for gender equality –one, because we don’t have it, but also we have to be an example to areas of the world where girls and women are not respected and even under attack.

LiisBeth: You’ve negotiated many contracts, as well as your own. I mean, you convinced hockey player Doug Gilmore to demonstrate putting on a condom — using the butt end of a hockey stick — at an AIDS awareness concert. Can you share any strategies for negotiating while female?

DD: It’s that whole Ginger Roger thing. She did everything Fred Astaire did but she did it backwards and in high heels. You do have to work harder. You just do, at this point. So I always go into a negotiation really well prepared…. I am a very emotional person. I really feel a strong sense of justice. You need that to push whatever boulder you are pushing up the hill. But you also need a very well prepared argument. You need a good fact-based argument for the person, for the policy you’re trying to put forward. Leading with emotion first, especially as a woman, will get you unheard pretty quick….

LiisBeth: Looking back over your career, you see that women still seemed to be stalled — in media, in politics and business, in the executive suite. Why?

DD: There’s a lot of debate about numbers, that once we get to 30 percent that’s the tipping point and everything will move forward into gender parity. There are different reasons women are stalled out. In politics, it’s tough for women. Witness what Hillary Clinton just did or tried to do. Women are placed under a burning spotlight, judged for the way they act, what they wear, whether they’re good jugglers…. Women politicians are objectified and eroticized and dehumanized. It’s unbelievable.

When it comes to (gender parity in) the boardroom, I think you have to have goals and measurable metrics against those goals because if you don’t put some muscle [accountability] around the idea that we’re going to bring more women into the boardroom…it never happens. So you have to build targets and you have to measure how you’re doing against them or you’ll never move that needle. There’s plenty of evidence to show that companies with women on boards thrive. It’s just common sense: Shouldn’t you endeavor to fully understand the population of your customer base (and not just half). If women are at the table, the decisions will just be better.

LiisBeth: Do you think if there had been more diversity at the table of record companies, they would they have anticipated Napster better?

DD: In my book, I go through where things went wrong, the mea culpas, but we’re in a very disruptive time for the communications industries. The record companies were the canary in the coalmine that took the hit first. We’re watching the media industry go through the same convulsions. The more diversity around the table, the better a business might be able to handle whatever disruption comes their way. You can’t go wrong with diversity. It’s good for business. It just is.

LiisBeth: You called your memoir As Fearless as Possible (Under the Circumstances). At the end of your book, you look forward, in future endeavors, to being as fearless as possible whatever the circumstances. If you could apply that notion retroactively, what would you have done differently?

DD: I was only able to do what I could do given the circumstances and the information I had and the people around me. But I also think there’s benefit to having a sense of humility and insecurity because it makes you consider your moves a little more fully and I think it makes you more empathetic to people. The whole idea of power for power’s sake or celebrity sake, it’s just so hollow to me. I think it’s okay to be a little nervous. It’s why stage fright seems to be good for artists. If you have a sense of humility and a sense of empathy then you will relate to your audience better versus just storming out on stage and being full of arrogance. Fearlessness is a fantastic thing and we have to be fearless to push those balls down the field that we need to, but it’s not unbridled fearlessness because we have to check the reasons why we’re feeling passionate about things in the first place and make sure they’re authentic and they’re true.

LiisBeth: Is there anything else you’re burning to talk? I’m sure there’s a lot!

DD: I occasionally come away from interviews thinking, god, I’ve been so terribly serious and I want people to know the book is funny. There’s some serious and raw issues I try to tackle in the book but. At the end of the day, it’s my story, and you have to enjoy life, you have to have some fun. I certainly did!