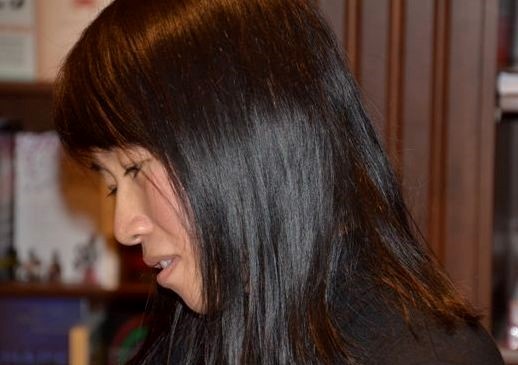 Eden Baylee takes a coffee break in her sunny kitchen one recent morning in Toronto’s Little Italy. The diminutive 52-year-old recalls in a soft voice, “I grew up in a conservative, working-class Chinese home, the daughter of immigrants. The message was, ‘Make money, make money, make money,’ so I chose banking.”

After graduating from the University of Toronto, Baylee worked in the banking industry. Decades later, she became a prolific indie author of erotica, flash fiction, and mystery. Baylee’s revitalized career may not be quite what her parents had in mind as a way of making money, but it combines a life-long passion for erotica (she secretly devoured Story of O at age 11, misreading “orgasm” as “organism”) with an equally strong passion for writing. Plus, she enjoys the creative license to weave tales that portray mature, sexually empowered female protagonists and having agency over business decisions, which is not typical of her working life at a bank.

Baylee’s path from banking to feminist entrepreneur took some twists and turns. First, she had to overcome breast cancer and the fear of leaving a secure career behind.

The Path Back to Writing

In 1999, 10 years into her banking career, Baylee defied parental expectations and moved to New York City to become a writer. But in the following months at the age of 34, she was diagnosed with breast cancer. She returned to Canada for treatment and, unable to work, had to borrow heavily from her brother as she underwent chemotherapy. Looking back on her exit strategy, she laughs now. “Gee, I didn’t plan this very well.”

Baylee put her writing career on hold again and returned to her banking job to pay off her debts. She was quickly promoted to lead project teams. In this role, she felt a huge responsibility to see those projects successfully through to completion as one project morphed into the next. She often worked past midnight. “If someone on my team was lax, I added their work to my plate. As the lead, I felt any failure would be mine,” she says. Her intent had been to stay at the bank for only two years while she saved enough to quit, but she found herself in the same position 10 years later. “Banking had invaded my life.”

Baylee’s path back to a writing career was made more complicated due to the fear that she would get sick again if she left banking. “I was afraid that I wouldn’t have any benefits and would be broke,” she says. Her husband, who sensed her growing unhappiness as she came home in tears many nights, insisted they confront her fears objectively. “The bank was chopping jobs right, left, and centre. It wasn’t as secure a job as it used to be.” They didn’t have children or dependents, nor an extravagant lifestyle. “I also realized that maybe security or amassing more chachkas isn’t really what I am after. Having dinner with my husband, and spending time with people we care about is what matters. If I have my health and am comfortable, I am happy.”

Finally, at 45, Baylee left banking in 2010 to pursue her dream. “I laid out a five-year financial plan knowing that writing is precarious,” she says. She prepared for the worst-case scenario such as needing expensive drugs again. “I was brought up to save and had saved a lot before I left the bank.”

Having worked as a senior project lead at a bank where she solved new challenges all the time, Baylee approaches her writing career as a business. She instills a corporate discipline to her routine, rising at 7 a.m. to meditate for an hour to “set a calm tone to write.” She writes 2,000 words a day, standing up at her kitchen counter, but considers herself a slow worker. “I have a bad habit of editing as I go rather than doing a clean sweep at the end.” Like her banking days, she often works past midnight.

Baylee’s first “coming out” was a self-published anthology of erotica, Fall into Winter, with tales of daring ménage à trois and seduction in New York, Canada, Thailand, and Austria. Her stories often riff off her own extensive global travels, which began with a trip to Asia after university. Her novella, The Lottery, was influenced by her real-life friendships with Thai sex workers in Bangkok’s Red Light district. This experience challenged her own privileged Western assumption that Asian women were doing demeaning work for the enjoyment of predatory men. Like many of Baylee’s stories,The Lottery shows how sexual submission and sexual power can co-exist even though it’s often a tricky feminist dilemma. In this story, the Western woman gradually realizes the power her demure, young, Thai friend has over men. “She can basically get a man to do what she wants, and yet, never has to be heavy-handed in her demands,” says Baylee.

Prior to self-publishing, Baylee had sent her anthology to several publishers including Harlequin without success. “It may have been too sexy for them because they didn’t have an erotica category at that time,” Baylee says. But in the back of her mind, she always knew that self-publishing was the better route. “I was a control freak so I didn’t want publishers to dictate my writing or give up rights or royalties.”

Baylee’s “slow” but steady approach has now resulted in 16 titles, some sold separately, some as anthologies. Her first 15 stories were novellas, but in 2014 she released Stranger at Sunset, her first of an anticipated trilogy of full-length mystery novels. “Erotica tends to be novella length, only 25,000 words, which makes it hard to weave an intricate story or develop your characters,” she says. Stranger at Sunset was her entrée into a larger, more expansive writing canvas. Even though her writing has evolved to a more mainstream genre, Baylee says, “There will always be erotica elements in my work.”

Perhaps the most successful way Baylee markets herself is by supporting other writers. She has published close to 300 interviews with other indie authors, which she promotes on her blog and other social media. In turn, she has been the subject of several dozen interviews. “It’s not about, ‘I help you, you help me,’” she insists. She has great interest in learning from other writers about their craft. “Writing is solitary so I had to develop a network because you don’t get out there to meet people,” she says.

Many online professional connections have blossomed into real face-to-face friendships. While many female erotica writers network primarily within their genre, Baylee purposefully built connections with both male and female authors of crime, horror, and literary fiction. She also follows many male poets and is very influenced by the poems of Charles Bukowski, the contemporary novelist, poet, and short story writer who Time called “a laureate of American lowlife.” “He is so sensual and lyrical. That’s how I wanted my writing to be.” Her strategy has resulted in a large male following, unusual for the erotica genre that has produced books like Fifty Shades of Grey.

Baylee now has an enviable social media reach: 29,000+ Twitter followers, 32,000+ blog subscribers. But she has stopped putting effort into amassing a larger following. “I was more engaged when I had 5,000 Twitter followers,” she says. She realized that having more followers doesn’t sell more books. “Engagement makes the difference.” She spends a few hours on social media every morning. “I equate these touch points to how I walked by people’s desks in the morning to ask about their projects or their families. You have to show your face so people remember you,” she says.

Baylee gets close to 500 e-mails a day and spends a lot of time writing personal e-mails and direct responses on Facebook. “That is much more important than retweeting tweets. It takes a lot of effort but in the long run it’s a better strategy. People like a personal touch. As a writer, I can’t ignore that,” says Baylee. Naturally, some followers think her works of fiction are autobiographical and she receives more than her fair share of direct messages from “stalker” men wanting a sexual conversation. “If people envision me in the role of a dominatrix, there is not much I can do to control it.”

Baylee distributes her novellas and books on many platforms including Amazon, Smashwords, B&N, Apple iTunes, and Kobo, where she retains over 70% of the revenue (traditional publishing offers only a fraction of this). On a daily basis, she averages 70 to 80 downloads. She uses one of her earlier short stories, “Seeking Sexy Sadie” as a loss leader, which gets up to 150 downloads a day. Baylee also uses ad campaigns, which generates 2,000 downloads during their duration. “This will usually have a halo effect for my other book sales for a few weeks afterward.”

While Baylee refers to herself as a feminist, she doesn’t write with a political agenda, even if it’s about the emancipation of women in a post-Hillary political climate. “I write as an entertainer. I don’t have an agenda of any kind other than to write a good story, good fiction,” she says.

The femme fatale character in Stranger at Sunset, a respected New York psychiatrist named Dr. Kate Hampton, is typical of Baylee’s strong, mature, female protagonists, which are sometimes composites of the go-getter women she met at the bank. “Many erotica writers write about 20-something, model-type, beautiful, cut-out people, which is how people think of sex. I couldn’t have written what I write now in my 20s. I didn’t have the experience or sexual maturity,” says Baylee.

Baylee acknowledges that some feminists are not comfortable with her characters, seeing them as victims who give away their power. Her novella Act Three has a controversial scene where Stella, a divorcee pushing 40 who desires sexual exploration after ending a traditional, sexually unfulfilling marriage, is forced into sexual submission by two men as a result of an earlier admission to her lover that this was a fantasy of hers. Baylee attended a book club meeting with a dozen young, bright, professional women and was surprised how unanimously they enjoyed Act Three. This led to a conversation about fear, sexual arousal, and how writers push the envelope of what is erotic.

Baylee is set to release the two remaining full-length books in her mystery trilogy later this year and her mind keeps spinning with new ideas. Unlike some of her former banker colleagues who are counting down the days to retirement, Baylee plans to keep going forever. “Retirement isn’t part of my vocabulary. It seems like a dated concept. Retire from what? Retire from life? You need to subject yourself to new ideas and environments. You have to be constantly interested and interesting. This is what keeps us vibrant and energetic.”

I Am Your Sister: Collected and Unpublished Writings of Audre Lorde (2011)

Why Erotica Needs Feminism: A 127 Page Thesis in 3 Pages by Ella Dawson