Just over seven years ago, Emily Mills found herself up late, angsting about juggling what felt like “a zillion balls.” She posted a picture of herself on Facebook working in the boardroom of her then-employer. The premise of her post: She was driven, always hustling, but she had reached a point of exhaustion.

Almost immediately several women in her personal network responded both on her Facebook wall and in her inbox, saying they were wide awake and feeling like they, too, were on a never-ending hustle.

“I was a bit surprised by the amount of conversation I was having at that hour of the morning,” she says, with a laugh. “And the conversation just continued so, I just kind of said, alright, fine, why don’t we get a bunch of us together – let’s talk about what we’re doing, how we can best support each other, maybe what we can learn from each other? How can we balance it all a bit better?”

From that, How She Hustles was born, a network that has grown to include more than 5,000 diverse women who (by their own definition) hustle. The network includes women ranging from teachers and academics to media personalities, corporate professionals and entrepreneurs. Mills says she started her enterprise without any clear business plan or five-year prospectus to achieve goals. Her entrepreneurial venture simply caught fire from that late-night Facebook confession.

Mills continued to cultivate the network through unique online and offline experiences such as brunches, after-work socials, pop-up shops spotlighting women of colour small-business owners and panel discussions. Paramount for Mills was creating an environment that would be welcoming to all women and not just those with a corporate title and corner office, which tended to be the clientele of the many well-established women’s networking events she had experienced. Those events, she says, “just weren’t working” for her. The energy was not as warm or congenial as she would have liked, and she wanted to flip the model on its head.

To make her events welcoming to all women, she put an intentional focus on younger, digitally savvy, diverse women and women of colour who had different priorities, lived experiences, journeys and concerns than more typical executive types.

“There are not a lot of spaces where you are going to have Brown and Black women driving and leading an event, yet there are women who may not reflect them who can participate and join the conversation,” she explains. “That takes a lot of courage I think.”

She also kept the cost affordable. There is no fee to join the network and admission to individual events ranges from $20 to $50.

Her strategy worked. The first brunch drew 50 women, and in the seven years since, all but one event has sold out. And those events typically draw 150 to 400 women. Mills built her network predominantly on word of mouth, social media and authentic engagement with other women and has yet to spend a dollar on paid advertising or PR that might have garnered media publicity. 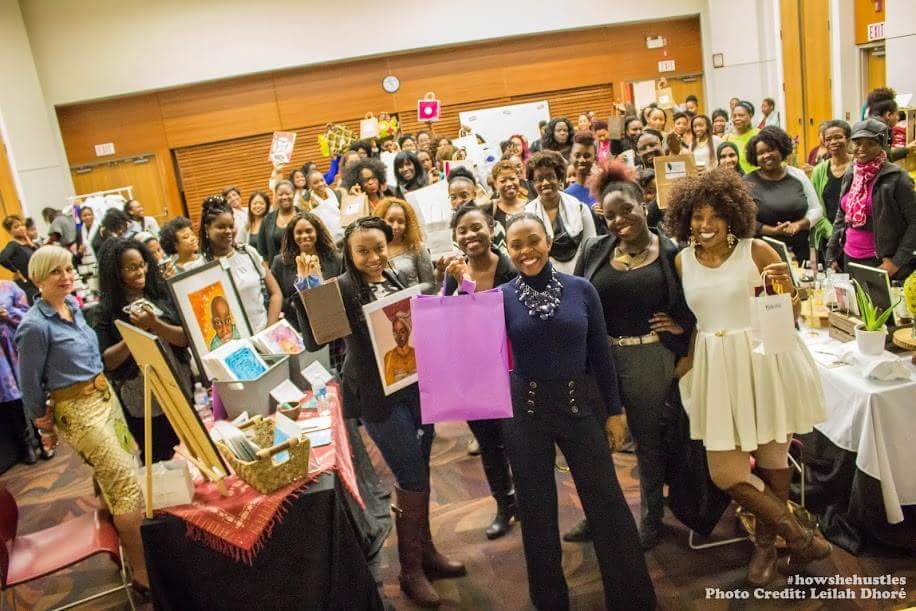 Entrepreneur Michelle Berry, 46, was an early joiner. The owner of Shelley’s Catering & Special Events connected with Mills via Facebook six years ago after seeing a post announcing Mills’ engagement. She ended up not only catering Mills’ wedding, but also several How She Hustles events. “For someone who was leery of women friendship, the How She Hustles network has made me more open to sisterhood,” says Berry, “that there are truly awesome people in the world who are rooting for you.”

From Mills’ recommendations and networking in How She Hustles, Berry’s client roster has expanded to include top corporate clients such as CBC, Women in Film and Television and the City of Toronto’s Identify & Impact Youth Awards.

Mills injects energy and excitement into the How She Hustles network by making each event unique. Each event is held at a different venue –Tract9 creative media space, Wind Up Caribbean restaurant (now closed) and North York Central Library to name a few.

Says Mills: “I think it’s a wonderful way to show different venues and establishments in the city that there’s actually a whole different demographic you may not be connecting with. It’s also a very impactful way of taking up space.” In fact, everything Mills does is intentional. “I’ve been very mindful to make sure that every single How She Hustles event really puts women first. So, if I’ve got a budget to pay for an AV technician, yup, I’m going to be negotiating with the venue and saying, ‘no we’re not using your standard corporate AV supplier. I want to bring in a young woman of colour who is a freelancer and she’s going to run the boards.’”

The most recent How She Hustles endeavour was Her Story in Black, an idea Mills put together after recognizing a noticeable void amidst the Canada 150 celebrations: the voices and stories of Black women in Toronto. She came up with the idea of creating a photo series reminiscent of high-end magazine spreads she had seen in Essence, Ebony and Vogue, featuring 150 diverse Black women excelling in their field.

In passing, Mills made mention of the project to a management executive at the CBC, where she works full-time in media communications. Her initiative piqued immediate interest, and the project ballooned into a one-hour documentary that aired on CBC as well as several television and radio segments about some of the women – ranging from a DJ to a neuroscientist – and culminated with a Black History Month event in the atrium of CBC’s Toronto offices that brought together 400 women. The 400 took a selfie that was retweeted by Prime Minister Justin Trudeau.

Mills was thrilled with the project’s impact. Women wrote to tell her that, until then, no one had ever invited them to public speak in their field of expertise, but after the project they had received multiple requests. She heard from mothers, sisters, grandmothers, daughters, even men, about how the project led to new conversations and opportunities for them.

At a private screening of the documentary for the women featured in Her Story in Black, Mills asked attendees to write on two sticky notes: their ask and their give. Mills then prompted some women to share what they wrote, understanding that for women (including herself) asking for help is often difficult. One shared her journey of entrepreneurship, the obstacles she had faced raising capital, as well as the personal challenges she had experienced losing loved ones along the way. Tears flowed from her eyes. When she finished her story, two others raised their hands. One woman offered her expertise in writing sponsorship proposals and grant applications. Another offered a cheque for $1,000 – no strings attached.

“I wonder how many networking events in the city would allow for people to stand up and be that vulnerable,” ponders Mills. “And how many events would create a space in the city where that demographic of women could even have that conversation?”

Ebti Nabag, one of the photographers who worked on Her Story in Black and has documented several How She Hustles events, says what Mills has built is rooted in sisterhood. “It’s just so heartwarming to see a large number of women attend and take over a space and make it their own because the energy is so positive, they just feed off each other,” says Nabag. “There are moments when you’re laughing, moments when you’re networking and then there are moments where your eyes are getting watery and teary because someone is sharing a personal story.”

And creating opportunities for such experiences is exactly what motivates Mills to continue to build the network, while juggling a career and being a mother to two young children. She has no plans to turn her business into more than a sideline venture; rather, her goal is to nurture a community of women and connect people in meaningful ways.

“This isn’t a full-time enterprise for me – I have a full-time job, it’s no secret. But I do think that there’s something – there’s a texture there. There’s a very specific calling to create spaces online or at events where women of colour and diverse women in this city can connect.”