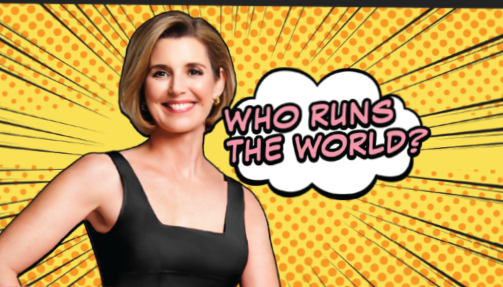 Feminists are never born. They are forged in the fire of experience. Sallie Krawcheck’s story, as told to an audience of 370+ mostly women business leaders at the Rotman School of Management in Toronto on Jan. 12, is a case in point.

Sallie Krawcheck, now 51, a celebrity ex-Wall Street CEO-turned entrepreneur, led a charmed life growing up. Her father was a member of the South Carolina House of Representatives. She was a homecoming Queen, cheerleader, track star and member of Tri-Delta Sorority; she received a full scholarship to complete her undergrad in journalism at the University of North Carolina at Chapel Hill and earned an MBA from Columbia Business School. Both parents raised her to believe she could do and be anything if she worked hard. She believed them.

And for awhile it seemed true. But once in the workforce in her 20s, reality hit. Having the “balls” to endure sexism was still part of the job-not of part the past. Krawcheck recounts how photocopies of penises were left on her desk each morning (apparently just for laughs). Years later, having built a stellar reputation on Wall Street as a gifted analyst with legendary work quality, integrity, and ethics, Krawcheck was fired twice, both times from high-profile public roles. And she is pretty direct these days about why: She was fired because she was a woman, or more accurately, because she brought a woman’s perspective to the CEO suite.

Up until then, she had not considered herself a feminist.

“In fact, if you had asked me four or five years ago, based on the business books coming [out] about women, [I thought] we were on our way! We were going to have a woman President in the White House! Well, that didn’t happen. Today, we have a misogynist in the White House.”

Today, Krawcheck believes that progress for women has stalled, and in some areas, even been rolled back. She questions whether having women on corporate boards will make a difference—if those women also think like the men around them. She is convinced a new approach is needed to advance women’s equality to the next level.

What is Krawcheck’s “New” Approach?

In her new book, Own It: The Power of Women At Work, Krawcheck starts with the idea that women need to stop pretending to be men.

In Krawcheck’s view, the old practice of acting and thinking like a man to get ahead and stay on top has only served to perpetuate pervasive and often noxious “white-men group think”, which, in her view, was the real cause of the 2008 financial crash. “As someone who had a front-row seat,” she explains, “there were no evil geniuses pulling the strings.” Just guys who all look and think alike, and as a result, “didn’t see it coming.”

For Krawcheck, the antidote to this kind of destructive group think is diversity. Yet, the reason even companies that embrace diversity policies fall short of promised potential is that corporate leaders “count” diversity versus truly “listening”, rarely reward or are truly open to diverse points of view. Krawcheck believes women also hide or hold back their differences, and in so doing, actually undermine the potential diversity might deliver. For diversity to work, someone actually has to say something, out loud, that challenges the status quo or calls out questionable behaviour. And that, Krawcheck says, doesn’t happen often enough.

Feminist anti-essentialists would take issue with Krawcheck’s view that women are intrinsically different from men, but she holds that we need to learn to leverage the “six things we naturally have going for us.” These include: relationship skills, love of learning, proclivity to think about the long term, being more risk-aware, better at managing complexity, plus giving weight to meaning and purpose when making career and money decisions. Krawcheck says we don’t need more empowerment. We HAVE power. We just need to believe in its legitimacy, potency, and use it.

She also says women need to initiate the “courageous conversations” required to foster real change. As for fear of reprisal, Krawcheck reminds us that women have more options than ever before to take their talent elsewhere—and perhaps even become a freelancer or entrepreneur (though I am sure that with time, she will soon learn that these options are not gender barrier free either, nor do they necessarily result in better personal financial outcomes).

Finally, Krawcheck suggests women need to get control of their finances, learn to invest what they’ve earned and may soon inherit, and leverage their growing financial clout to create change. Money, after all, still talks.

While Krawcheck rejected feminism in her earlier years, today, she fervidly brandishes the term around as part of her personal and new enterprise’s brand ethos. She talks proudly about how her son calls himself a feminist, and she has named 2017 as the year of the financial feminist. She interviewed Gloria Steinem (and noted in her talk that Steinem still has Macrame on her walls). Meeting rooms at Ellevest, the digital advising company for women she co-founded last year, are named after women feminist leaders (G for Gloria Steinem and A for Alice Walker).

Her earlier book, Mind the Gender Gap, is an excellent financial management resource that identifies where women are paying more due to gender, and what to do about it.

However, on the question of how to drive much-needed systems (political, economic, social and cultural) change, Krawcheck seems less sure of herself, her answer toned by an air of resignation.

“Well, we have to take control of what we can take control of,” she said in response to a question from the audience. “I think we have to work on the big stuff (like a parental leave in the U.S.), but we can only go so far.” She adds that we should elect more women, mentor women leaders, and write more often to elected representatives.

But let’s be honest. We all know from decades of doing these things that these approaches haven’t moved the needle as far, or as permanently, as we would have liked. We also know that any progress made can be summarily flattened by one single election or world event.

That is why feminism is not just about dealing with surface issues like corporate glass ceilings, or “living the life one chooses”. Fundamentally, it is about building better economic, social and political systems which as a result of enlightened design, inherently ensures equal political, social and economic power between the sexes, regardless of race, creed, colour or religion, for the benefit of all people and ultimately, the planet.

Will “Owning It” and Using Financial Power Bring on Equality?

Krawcheck’s own story shows she “owned it”, and had financial power. But that didn’t stop the men in charge from silencing her. So the answer is: Not likely.

Notwithstanding, Krawcheck’s advice for women to present authentically is refreshingly different from most of the women’s advice books out there. And it certainly is a break from the type of advice hocked by other female role models in positions of power such as real estate mogul and Shark Tank investor Barbara Corcoran, who says women should “hike up their skirts” to get ahead, or uninformed dismissal of feminism by women like Canadian celebrity entrepreneur Arlene Dickenson.

I also welcome Krawcheck’s efforts to help women recognize and use their financial power to create social change. And I am encouraged to see a wealthy, privileged, influential women like Krawcheck get ”woke” by reality and, as a consequence, re-engage with feminism. Feminism needs women from all walks of life and points of view to get on board with the movement—especially now.

That said, Krawcheck and others like her also need to remember that feminism is a long-standing, diverse and international movement (in existence since the 1600s) comprised of thousands of small grassroots organizations working for equality with scarce resources.  I hope her philanthropy is well aligned with her new feminist identity

Also, there is no such thing as one feminism, nor a dispassionate feminist. Thus, choosing low cost, high volume strategy for a “women’s centric” product-based enterprise that also aims for outsized investor returns while flying a feminist flag is risky. It reduces the addressable market. Polls (there are many, all similar conclusions) indicate that only somewhere between 18-23% of women openly identify as feminist.

And then there is the wide open ‘net. White male CEOs in secluded 40th-floor corner offices are one thing; radicalized internet trolls, male and female, who are everywhere, and know where you live, are quite another. The persistence, tactics (e.g.: calling for boycotts, generating negative publicity, hashtag campaigns) and recent growth of the women’s anti-feminist movement and men’s rights activism (MRA) movement is also worrisome. Krawcheck’s profile and feminism will likely draw their attention.

Andi Zeisler, author of We Were Feminists Once, wrote “The problem is – the problem has always been – that feminism is not fun. It’s not supposed to be fun. It’s complex and hard, and it pisses people off. It’s serious because it is about people demanding that their humanity be recognized as valuable.”

By mixing business with feminism, I hope Krawcheck, her board of directors and investors know they are in for an interesting ride. Building a business is one thing, but learning how to constructively deal with activism and gender politics is quite another.

As Gloria Steinem said, “Any woman who chooses to behave like a full human being should be warned that the armies of the status quo will treat her as something of a dirty joke . . . She will need her sisterhood.”

“Meaning is the New Money“, by Vicki Saunders, Founder, She-EO