The Day Hillary Came to Town

Over 5,000 Canadian men and women, plus strong representation from Democrats Abroad came together on Sept. 28 at Exhibition Place in Toronto to hear Hillary Clinton talk about “What Really Happened” (also the title of her new book). The book tour based event started on a weird note with a 15-minute live musical performance by a tenor. But setting that aside, Clinton pleased the crowd, delivering inspiring one-liners, including “I’ve been called many things, but quitter is not one of them!” and “The only way to get sexism out of politics is to get more women into politics.” Each was followed by deafening cheers of support.

The crowd became more subdued as Clinton revealed new details about Russian election interference via twitter bots and artificial intelligence (AI) to help spread false news. What we have learned from this past election, she argued, other than that America is still not ready for a woman President, is that false news is now the most clear and present danger to our democracy — a system that depends on a well-informed citizenry.

And Clinton is right to have emphasized this point. AI is serious business.

Vinod Khosla, a 62-year-old billionaire American-Indian engineer and venture capitalist who now writes a popular blog on tech trends, told the 5000+ audience at Elevate Toronto on September 12 that the new weapon of mass destruction in the digital world will be AI. All nations are working hard to master its power. To bring the point home, Khosla reminded everyone that  Russian President Vladimir Putin recently said, “Artificial intelligence is the future, not only for Russia, but for all humankind. It comes with colossal opportunities, but also threats that are difficult to predict. Whoever becomes the leader in this sphere will become the ruler of the world.”

That used to be said of nuclear bomb technology.

Last week, Gartner, a reputable American research and advisory firm providing information technology-related insight for business leaders, published its latest future trends report. It predicts that “By 2022, most people in mature economies will consume more false information than true information” and that in three years from now, “AI-driven creation of ‘counterfeit reality’ or fake content will outpace AI’s ability to detect it”. The forecaster also predicts that 50% of companies will be spending more per annum on bots and chatbot creations than traditional mobile apps.

Here at LiisBeth, we have written about how AI science, stewarded by men at this point, has serious gender implications to consider. Imagine a world where patriarchal responses to “If this, then ____”-based algorithms are so deeply encoded in systems of life on this planet that systemic issues they inadvertently create they might never be reversible. Microsoft’s Tay, the twitter bot that became so misogynistic and racist after 24 hours of “learning” from humans that it had to be quickly unplugged and put down before more damage could be done, is a good example.  Luckily, Tay, considered an AI “toy”, was not driving cars or deciding who would be scheduled for work next week.

AI can make lives easier, reduce costs, and the technorati say it might create more jobs than it eliminates in the long run. But at what cost? 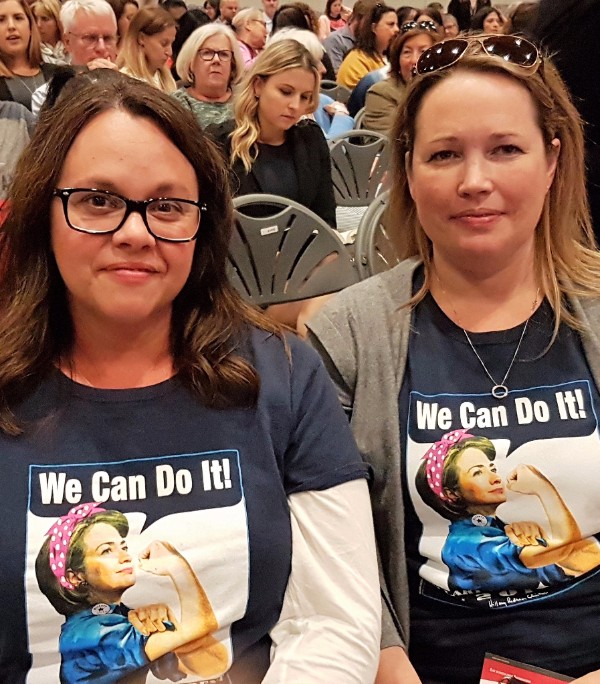 Back at the Clinton event, LiisBeth spoke with attendees Pamela Librasso and Sara Vause to find out why they were there. Both spoke about being awed by Clinton’s incredible career, her long-standing commitment to advancing women, and their deeply felt disappointment at the outcome (and continuing fallout from) the results of the U.S. election.

Librasso was so jacked up about Clinton potentially winning the election she flew down to be part of her last campaign rally… and she is a Canadian!

“Anyone who said her being a woman had nothing to do with her losing is absolutely wrong,” said Vause.

Clinton adds that anyone who believes false news spread by early-stage AI on social media in the form of twitter bots had nothing to do with it, is equally wrong.

Most of the people attending the Clinton event were there to show their support and appreciation for this intelligent, fearless woman (no matter what your opinion of her politically might be) who built and earned an amazing, and not over yet, career.

Most left feeling that they just experienced another important wake-up call regarding AI.

Feminist thought leaders need to get serious about amping up their interrogation of this emerging technology. To quote Clinton, we need to “resist, persist, insist and enlist” to ensure we continue to advance gender equality, especially in a AI-weaponized world.

There have already been a lot of news stories written about women’s advocacy organization  Catalyst Canada’s recent decision to appoint yet another male bank CEO as the organization’s Chair of the Board.  But we felt the need to weigh in too. Spoiler alert: It’s not just the optics that we need to consider. Find out more here.

Want Change? Put a Woman in a Ring on It! Part II

This week on LiisBeth, we publish part two of Savoy “Kapow” Howe’s story where she talks about running a trans-inclusive enterprise and her experience working with people with disabilities in the boxing ring.

Howe is the founder of the Toronto Newsgirls Boxing Club. On the subject of why we still need women-centred spaces, she says “I noticed that once I took my club out of a co-ed space we were renting, the women became, well, bigger. They took up more room. And became more of themselves.” Check out part one of her story here. Part two can be found here. 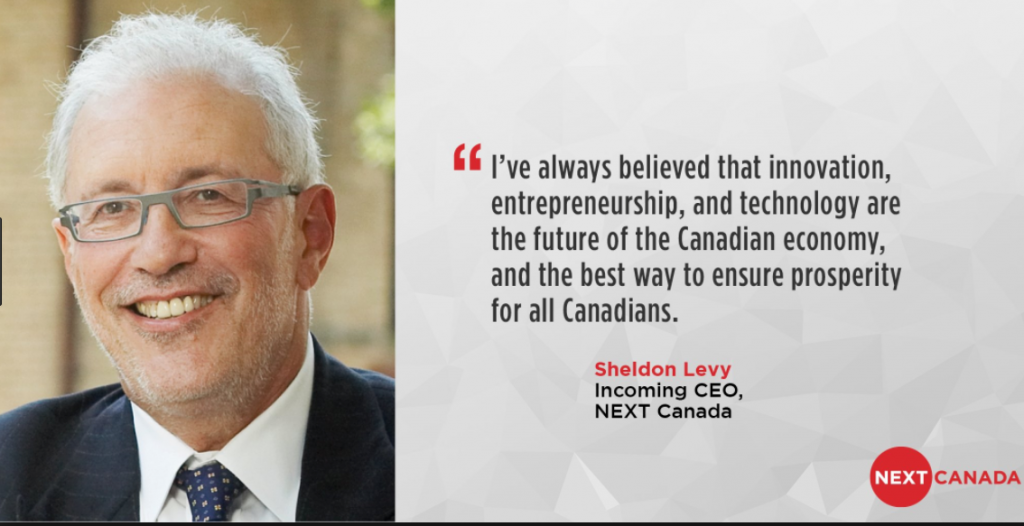 Sheldon Levy is a man of great accomplishment. His impact on Ryerson University and the city of Toronto is legendary. The Ontario Deputy Minister of Advanced Education and Skills Development (until Nov. 1) is the co-founder (along with Valerie Fox) of the top incubator in North America, the DMZ. He is the former president of Ryerson University. And he was recently named the new CEO of Next Canada, a startup incubator at the University of Toronto — one not known for the gender balance of its participants, mentors, lecturers or board.

LiisBeth had a chance to speak with Levy about what he thinks is necessary to increase the number of women participating in Canada’s accelerator and incubator spaces, including the one he now leads.

His answer: Change the climate, not the individual. He adds that based on his own observations, and to his dismay, many of these male-dominated environments are “not fun for women”. He added “We are not being honest about what the problem is.”

Hiding from this truth could be a contributing factor behind poor gender balance outcomes in incubator and accelerator spaces across Ontario. Even for Ryerson’s celebrated digital media zone, the data shows that women-led companies at DMZ currently add up to about 16% of all companies working in the 70 000 sq ft space. When you expand the count to include ALL women working in any role, in any startup, it increases to approximately 30%.

Liisbeth went on to ask Levy if he was a feminist. Levy replied, bemused, “I have not thought about it. I guess I would say I am just a person with my eyes open.”

Let’s see if having one’s eyes open is enough to make a dent in the previously reported on gender bias issues at Next Canada. 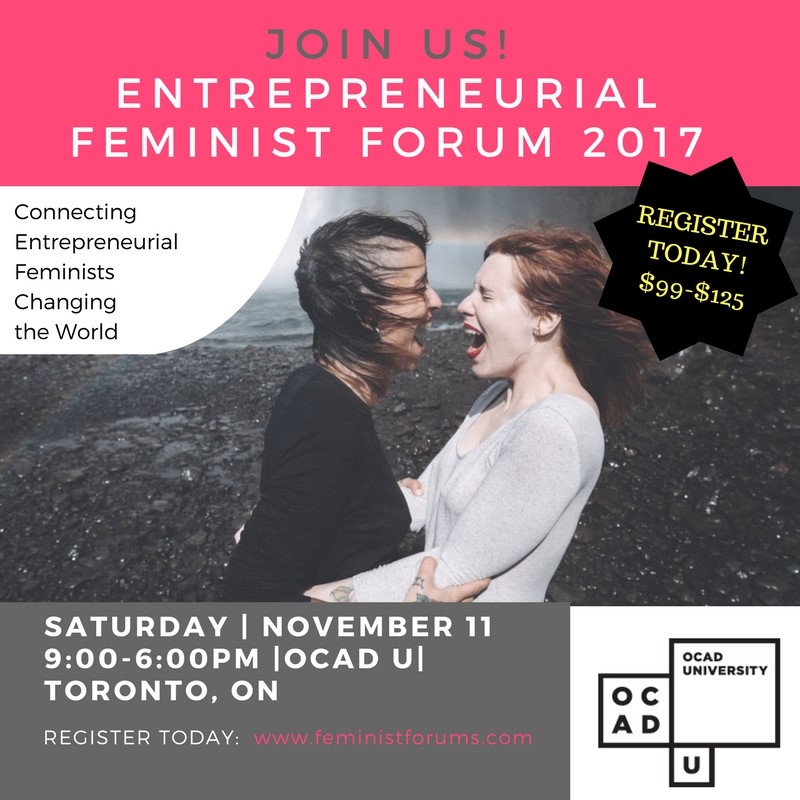 We know that systemic barriers prevent the majority of people on the planet from participating fully in life on the planet, and from determining our collective future.

So what’s the good news?

In fact, today’s fast-growing number of entrepreneurial feminists are leading some of the most exciting transformations in our communities, the economy — and more importantly — our minds.  It was time to bring them together as a community.

At this inaugural Entrepreneurial Feminist Forum, we will be connecting, exploring and learning about diverse feminist approaches to business design, product and service innovation, alternative success strategies, feminist metrics, and much more. The forum is designed as a feminist, inclusive event and features a lot of doing, not just talking!

Confirmed speakers already include Dori Tunstall, Dean of Design at OCAD University, Dr. Barbara Orser, University of Ottawa Professor and co-author of Feminine Capital, CV Harquail, PhD, Stephen M. Ross School of Business (NJ) Professor and Co-founder of Feminists at work, Kelly Diels, feminist marketing consultant and author plus many more who will be announced in the coming weeks!

We are still open for workshop proposals until Oct. 15. Check out the guidelines here.

Don’t miss this opportunity to learn about new tools, ideas, share your work, identify future collaboration opportunities, become inspired, and find out more about entrepreneurial feminism as a force for change.

Early bird tickets at $99 are limited ($125 per person afterward). Get them while you can. Here. Now!  For more information visit www.feministforms.com. For those for whom price or any aspect of the event is a barrier please send us an email and we will find a way to accommodate! If you have questions, email publisher@liisbeth.com.

Did you know that Women’s Chambers of Commerce organizations exist in many countries across the globe, except Canada?

Well, that’s about to change.

Last week, Heather Gamble, founder of Women on the Move, announced the creation of Canada’s first Women’s Chamber of Commerce. The new Chamber, due to launch officially on November 30th, will provide resources and advocate on behalf of women entrepreneurs in Ontario.

Ontario is the Canadian province without a Women’s Enterprise Centre.

If you would like to learn more about this initiative or want to become involved, consider attending their October 12 information session (this Thursday) from 6:30-8:30pm at Women on the Move, 2111 Dundas Street West, Toronto.  To RSVP, click here. 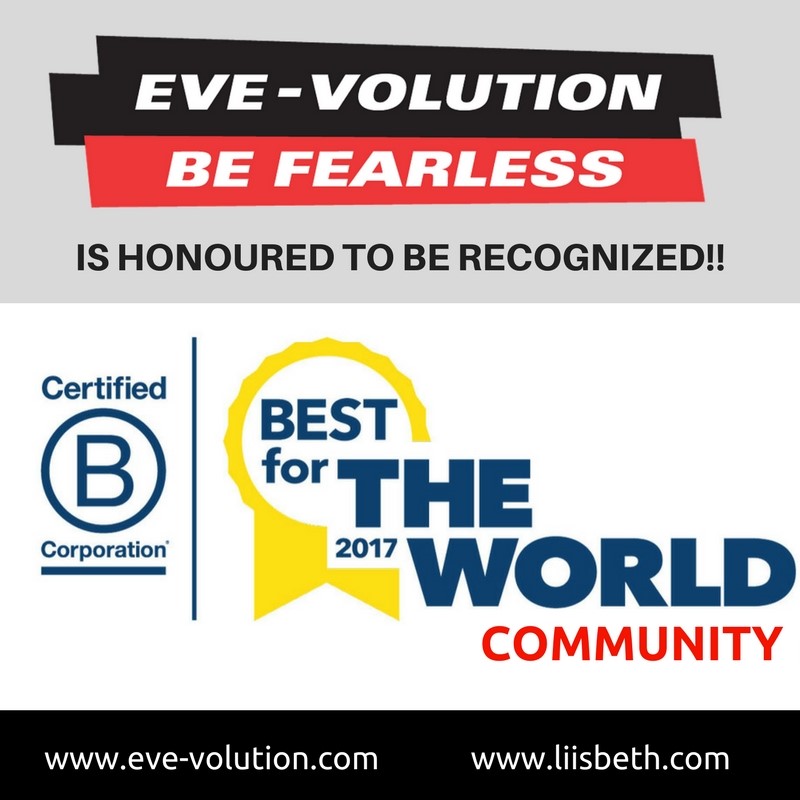 Eve-Volution Inc. is Recognized as a Best For the World B Corp!

As you may know, LiisBeth Media is a division of Eve-Volution Inc., a three-year-old  B-Corp-certified consulting and educational enterprise that focuses on helping advance gender equity and inclusion in the entrepreneurship and innovation space. Eve-Volution Inc. was recently recognized as one of 2017’s “Best for the World” B Corps due to our community impact scores! If you are interested in learning more about Eve-Volution Inc., visit www.eve-volution.com.

IN CASE YOU MISSED IT?

That brings us to the end of this October newsletter.

We hope you enjoyed it as well as our deeper reads at www.liisbeth.com.

If you like what you read, we humbly remind you that subscriptions are $3/month, $7/month or $10/month. We accept PayPal and credit cards. Funds go directly towards paying writers, editors, proofreaders, photo permission fees, and illustrators. LiisBeth needs your love—and financial support.

The next newsletter is scheduled for early November. In the meantime, take care of yourself. And each other. It’s been a little rough out there for many of us these past few weeks.