Closing up shop is a difficult and emotional business decision, but sometimes it’s written in the cards and trusting your gut is the healthiest thing you can do for new growth.

“I’ve actually been pulling this card a lot lately,” says Emily Rose Antflick. She shows me the purple Tarot card of Rhiannon the Sorceress, sitting atop her white unicorn under the moonlight. Antflick, a 36-year-old redhead, reads me the caption at the bottom: “You are a magical person who can manifest your clear intentions into reality.” This is a comforting message for Antflick. These winks from the universe re-assure her that she is on the right path.

We are sitting in Antflick’s living room, not far from the old office of Shecosystem at Bloor and Christie in Toronto. Antflick closed the feminist coworking space she founded in 2015 this past August. She describes this as the “shecompost” process. Composting turns decaying matter into nutrients to feed new life. While Shecosystem as a physical space is no more, its seeds are taking root elsewhere.

Shecosystem was a bright, beautiful space where entrepreneurship blossomed under feminist values. Tarot cards were just one part of Shecosystem feminist practices. Each morning, members gathered in a circle of guided meditation and expressed an intent for the day based on the card they pulled. “It was about being able to witness each other, hold space for each other,” Antflick says. But the physical space, with its heavy operational demands, was zapping Antflick’s creativity and joy. “The ‘rational’ voice –quote, unquote—says: well, just suck it up,” says Antflick. “This is entrepreneurship.” She decided to listen to the other voice. The one that told her to trust her feelings, to listen to her body.

Closing Shecosystem was a complex decision

Antflick’s identity was rooted in its soil, which was growing thin. After months of reflection, and sharing her feelings in the morning circles, her decision was made. She thought: “This is something that deserves gravity, to be marked and to be witnessed.” So an ordained Jewish priestess conducted a Havdalah ceremony. Havdalah marks the end of the Sabbath, the break between the holy day and the profane. “There were candles and spices and wine,” Antflick says. These symbols drew people to recall their sweet memories and what had been illuminated for them at Shecosystem. “I just lay on the floor in the studio and cried,” Antflick says. People joined her. “It turned into this big cuddle puddle on the floor and then we left.”

Of course, at this time of transition, people wanted to jump in and offer solutions. Antflick was clear with her community that she was not seeking advice about her decision, or the possibilities for the future. She had learned her lesson before. “When you put out a general call for help, it just ends up being this whirlwind of really uncentered advice,” she says. Nobody ever told her: “Oh, let me hook you up with an investor,” she laughs. What she did need from her community was an understanding of how Shecosystem had an impact on their lives.

Antflick initiated one-on-one conversations to capture and document key moments in Shecosystem’s legacy. With one member, she drew all the connections on a whiteboard, with separate branches for clients, friends, and the collaborations that had formed within the ecosystem. The network was extensive. “One of the fantasies that I’ve had is actually putting together a network map where I can see what all those [connections] were,” Antflick says.

These conversations also helped quiet her inner critic. Many told her that she was what made Shecosystem such a unique and special place. It’s been hard for Antflick to acknowledge just how much good she has done. She is conscious of her privileges—a white, cisgender, hetero woman from an affluent family. She was in a financial position to take the kind of risk that opening Shecosystem required. But, she often felt that this invalidated everything she was doing because she hadn’t hustled hard enough. The feedback from her community helped: “Being able to value myself, the work that I’ve done, and the courage that it took.”

Shecosystem remains an active virtual community, with a broader mission of bringing a more feminine balance into the working world. One of the members started a Facebook group called “Shecosisters Seeking A New Home.” Antflick thought a good way to help was to offer to facilitate the morning circles at other coworking spaces. She did this for free, in exchange for her members getting a free day pass. “If I think that it’s something that’s going to have an impact on people, why be proprietary about it?” she says. She wonders whether sometime in the future she will market Shecosystem’s practices to corporations. She understands the value she brings.

For now, Antflick is resisting the temptation to jump to the next thing. “It’s hard to shake traditional expectations,” she says. “Our work becomes so inextricably tied to our identity.” Instead, she is allowing herself to be in the “goo” – the imaginal phase between the chrysalis and the caterpillar. She has decided to escape the noise of the city this winter. She is heading to a quiet place, close to nature. She will listen to her intuition and make space for creativity.

Creating informed and inspirational content to support feminist changemaking takes hundreds of hours each month. If you find value and nourishment here, please consider becoming a donor subscriber or patron at a level of your choosing. Priced between a cup of coffee or one take out salad per month.
<< PreviousFeds Drop $9 Million Into Women’s Entre-preneurship
Next >>What the EFF? Top Six Takeaways from the 2018 Entrepreneurial Feminist Forum 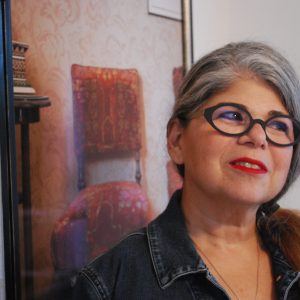 Thank you so much for this article. It de-stigmatizes the shifts and transformations that are a part of being an entrepreneur (feminist or otherwise). I know many women who have had to shut the doors of businesses at various points in time and for many reasons. This article is a helpful reframing of that process. I love the concept of composting and knowing when it’s time to let something go so the resources can transform into something new.