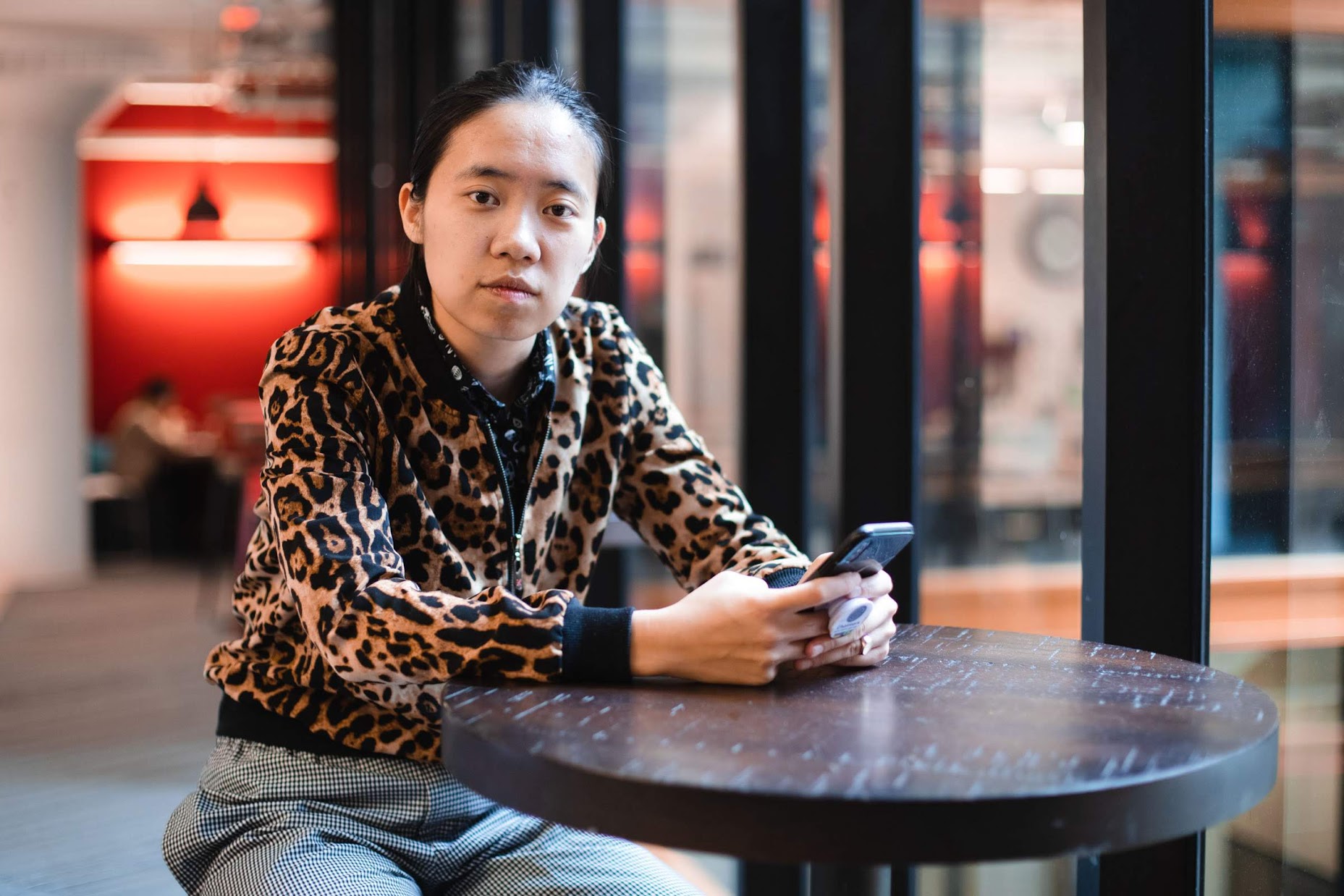 Working as a user experience designer at a tech company, CG Chen had done co-design workshops before, but this one was different. Around a dozen young people crowded into a small room at Sherbourne Health Centre in downtown Toronto, to share their experiences with homelessness. They appeared to be  between 16 and 30, identified as LGBTQ2IA, and participated in the health centre’s Supporting Our Youth (SOY) program that promotes wellness for at-risk youth. That day, they didn’t come seeking support, but to lend a hand—and to share their experiences so that Chen’s non-profit startup, Ample Labs, could improve an app to access services for the homeless.

Creating a trusting atmosphere for the youth living on the street took conscious effort. Chen met with SOY staff multiple times in advance to ensure the workshop was a safe space, anti-racist, and anti-oppressive. Then Chen got creative, handing out writing and craft supplies to those gathered around a large table, so they could express themselves authentically and on their terms.

They came from different backgrounds—some had lived in Canada for years, others had recently arrived as refugees—but they all shared a key concern when looking for a place to spend the night: safety. The participants told horror stories of ending up in shelters that weren’t LGBTQ2A friendly—and experiencing violence and trauma as a result.

During this co-design session and many others, Chen and her team of volunteers at Amble Labs also discovered that many initially facing homelessness turned to Google for help as they were often too ashamed to seek out in-person resources. But the Google results that came up were not very helpful. That was one of the main frustrations people in the sessions expressed—service agencies don’t actually involve or listen to the concerns of individuals experiencing homelessness.

Says Chen of Ample Labs’ venture to change that: “We bring the people that we build this product for into our process as much as possible so they’re part of building the solution with us.”

The result? Chen and her team learned that Toronto’s homeless population has high concentrations of people identifying as refugees, BIPOC (Black, Indigenous, and people of colour), and/or LGBTQI2A (particularly youth). So Ample Labs decided to focus on creating solutions for individuals between the ages of 16 and 35 who are at risk of or experiencing homelessness and come from diverse identities and situations. One of their first creations was ChalmersBot, a free web-based chat-bot that provides location-based information. You enter what you need—a warm meal, clothing, shelter—and ChalmersBot suggests a nearby resource. After what they learned at the SOY workshop, Chen and her team added a filter to ChalmersBot to identify resources that are LGBTQI2A friendly.

Chen describes working intentionally and directly in a co-design fashion with the homeless community as a feminist approach. The goal is to understand what the homeless need and empower them to contribute to solutions, so services created are actually used by the community. “It’s easy to identify as a feminist organization because with the app and in everything we do, we are trying to promote equality in this community that often times struggles with inequality.”

Could a Sandwich Start a Revolution?

Chen, now 27, can trace the start of her journey to a sandwich. While studying graphic design at the Ontario College of Art and Design (OCAD), she had to pass by people living on the streets of downtown Toronto—and eventually found she could no longer look away. So Chen gathered some friends and started distributing food to the homeless.

A sandwich often led to conversation—and a new perspective. “I think a lot of us really wanted to understand how people ended up there, what they are like. Who I thought the homeless were was turned upside down because I met previous entrepreneurs and really wealthy people who, through a series of unfortunate events, ended up on the streets.” For instance, a highly educated doctor who wound up homeless after going through a rough divorce.

Chen started seeing homelessness in a new light—a difficult situation that can happen to people of all backgrounds. That realization hit home in 2019 when Chen’s own mother experienced homelessness after a surgery made it difficult for her to find work. “If it was your family, how would you look at things? How would you treat that person you see on the street if she was your mom?” Chen asked in a blog post.

For her undergrad thesis, Chen explored how to use design and technology to help the homeless, redesigning a list of City of Toronto resources into a user-friendly website. She took a tech job after graduation, but a trip to Los Angeles reignited her passion for helping people struggling with homelessness. During a visit to LA’s notorious Skid Row, an area of downtown with a high concentration of homeless individuals, she met a woman teaching computer skills, such as how to craft a resume, to people on the street. What struck Chen? While residents of Skid Row lacked a permanent home, they often had cellphones or access to technology. (In a survey of 421 homeless individuals, 94 percent of respondents said they owned a phone and used it as an essential tool for communication.)

That trip helped Chen envision an opportunity to combine her skills in tech and her passion for helping the homeless. As she had done with her sandwich runs, Chen gathered a group of friends to reach out to the homeless community in Toronto and learn more about their needs.

Simon Bunyi was part of the Ample Labs team when he found himself in the same situation as people they were trying to help. He was laid off from a Fortune 500 company and later evicted from his apartment; this is statistically the most common reason individuals end up homeless in Toronto. Those were his “darkest days,” he says, looking back. “It made me think more about how I interact with people.”

Bunyi had been living in an area of Toronto with a high concentration of people living on the street. He came to realize that the only thing separating himself from them was a regular paycheque. When that disappeared, Bunyi reached out to Chen and Ample Labs to help him navigate the complex network of websites and resources for help. They thought it would be simpler if there were an app for this. And that was the beginning of ChalmersBot. (Watch the full story below.)

So, More Apps for That?

Chen never intended Ample Labs to be more than a side project, but after the beta launch in November 2018, the team of 20 to 30 volunteers realized the service had tremendous potential to help the estimated 235,000 Canadians who will experience homelessness. In the past, that population largely comprised of older, single men, but according to the study, Canada has seen a rise of women and youth ending up on the street. With its ability to tailor resources to specific demographics, ChalmersBot generated attention. Ample Labs raised money from a crowdfunding campaign, grants and corporate sponsors (including TD, Google, and Twitter) and found a home in Ryerson University’s Social Venture Zone. The goal is to generate additional, sustaining revenue selling ChalmersBot services to cities. Barrie, Ont., was the first to buy in. Numerous other cities in Canada and the US have shown interest.

Ample Labs now has 8,000 unique users in Toronto and multiple contractors, prompting Chen to quit her job as a UX designer and become Ample Labs’ first full-time employee. She’s recently hired a second employee and plans to continue expanding the team in 2020. Though the non-profit is experiencing exciting and rapid growth, the culture and core values of Ample Labs remain the same.

“Internally, we’ve built a culture of always learning from each other and making sure it’s diverse voices that are teaching the rest of us,” says Chen. “We want to build something with people, not for people.”