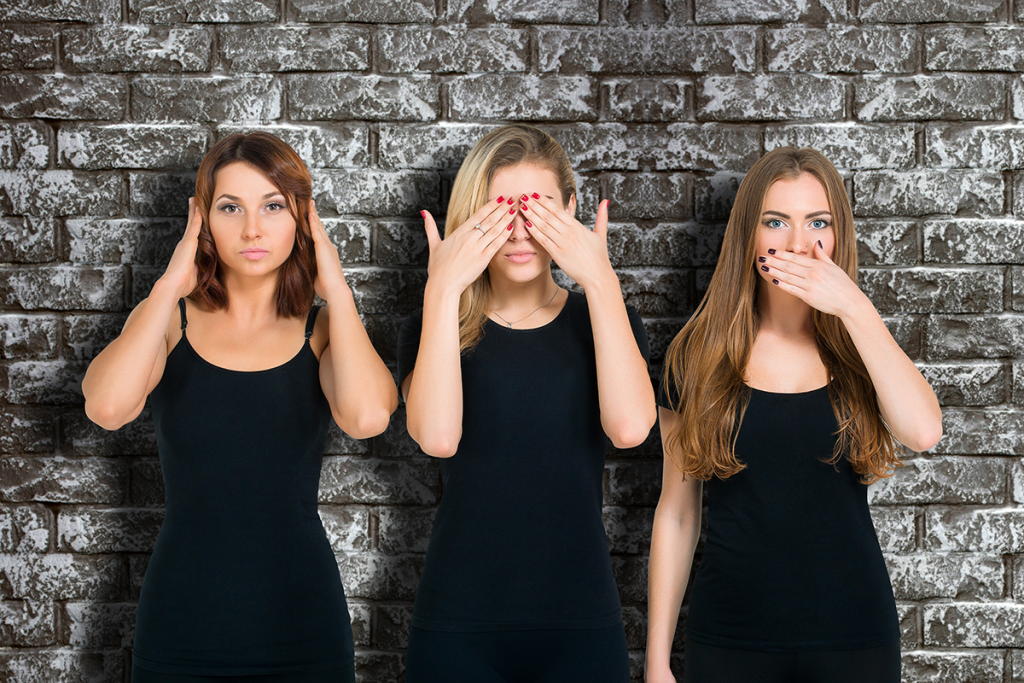 Core values influence everything you do in life if they’re truly core to who you are. You don’t need to embed them when you live them. Still, there are lots of outside influences that may challenge those values, and developing the radar to question what may parade as a feminist value—but isn’t—is an important skill.

Recently, Gregory Cowles, who writes for the New York Times, had this to say about The Rainbow Comes and Goes, a book by the celebrity mother and son pair, Gloria Vanderbilt and Anderson Cooper: “Vanderbilt is frank and sometimes salty, as when she confides that she faked all her orgasms until she met Howard Hughes.”

You may be thinking, what is the connection between faking orgasms and embedding feminist values in the operation of your company? It’s about speaking the truth. I was struck by the idea of “faking an orgasm.” What does it mean when a woman fakes an orgasm rather than telling her partner what she needs to achieve orgasm? There are layers of possibility: She doesn’t want her partner to feel inadequate; she doesn’t yet know how she can orgasm; she doesn’t enjoy sex with her partner; she’s uncomfortable with her own sexuality. Why can’t she speak the truth and tell her partner that she hasn’t or doesn’t orgasm but would like to, so can they work on it together?

Until we are able to speak up, speak out, and speak our truth, we will be barred from full equality. Women are frequently characterized as worrying more about being liked or coming across as too aggressive. We are not encouraged to claim credit for our own ideas, or claim the space to speak and be listened to. These behaviours are influenced by socialization. Temperament plays a part, but men and women with similar temperaments are socialized differently, with different encouragement and outcomes. When Sheryl Sandberg urged women to lean in, she was encouraging us to claim our space and use our voice. Desiring satisfying sex and knowing how to achieve it may have similarities to building a successful business.

Developing a feminist understanding of what is going on around you means observing, listening, and constantly questioning. That is how you build the confidence to speak up and find the voice that expresses your truth. Ask yourself who is speaking, whether they have a bias, and what it might be. Examine it and ask yourself why. Don’t assume that the person who speaks most is the most expert, that the person with the strongest opinion is the smartest, or that the most experienced person has the best connections. Questioning leads to uncovering the truth. It takes time and experience to develop the skills and the courage to question effectively.

I don’t think it’s possible to effectively embed values you don’t live by into your work. If you believe in equality, then you’ll be uncomfortable in a situation that is unequal. You’ll know because you’ll feel it. The felt sense is not just what’s in your head, but what’s in the pit of your stomach, which is a telling indicator. How do I know something is out of kilter? My breathing changes. I used to ignore it, thinking only what I think is important. Then along came EQ, or emotional intelligence, and the recognition that the most effective leaders have both intellectual and emotional intelligence. What used to be dismissed as women’s intuition is now recognized and validated as an essential component of being effective. Now I pay as much attention to what my body tells me. It’s the felt sense that often triggers the most critical analysis of what is going on around me.

Embedding feminist values into your life, and therefore your business, will involve challenging the status quo.

There are lots of things going on around us that are highly discriminatory, but sometimes you have to scratch the surface to discover them. Have you ever worked in a business environment where there is a cone of silence around salaries? Have you wondered why? The inference is that someone else isn’t getting the same salary as you, so don’t blow your advantage. But whose interest is it in to encourage people not to share their salaries? Not yours if you’re the one being discriminated against. Employees who accept being silenced are buying into inequity.

When information is open and shared, and everyone knows what it takes to get to a particular position or level, then there is no need to be secret. Silence reinforces secrecy, and secrecy encourages people to see themselves as winners or insiders. If you’re an insider, it means someone else is an outsider. And at any moment the tables can turn. Sometimes women covet the insider position, having long been denied it, but by being silent they actually advance inequality while believing they have broken through it.

Not every decision you make for your business will be overtly feminist. You may select a supplier because they have the best reputation. But if you accept that at face value, the business landscape will never change. Bringing feminism to your business may be as simple as checking your assumptions and questioning the common wisdom. When is the last time you intentionally checked to see if there were any women in your sector who could be a supplier? Perhaps there’s a supplier who has newer businesses just like yours and has not yet built up a long-standing reputation, but they know their stuff. You could help each other break through some of the “old club” barriers. The pie will only get bigger if you’re willing to roll the dough out farther. Just as your openness might benefit another woman’s business, the same could hold true for yours.

If you are a woman running a trucking company, I can guarantee that you will face barriers just because you’re a woman—and not because you can’t do the job. Take the time to check and see if you’re making, or accepting, any assumptions that men are better at the job because they’ve been doing it longer. Challenge yourself to think independently. Being passive in your decision-making is about as satisfying as a faked orgasm.

The only lesson I repeat again and again is to remember that we have all had a helping hand at some point along the way in life and business. For some, that help is big and obvious. For others, it’s so small that the person may not have realized it at the time. But no one does “life” alone. It’s important to remember that for yourself and for others. And if you do, then you’ll have embedded an important feminist value in your practice and beliefs.