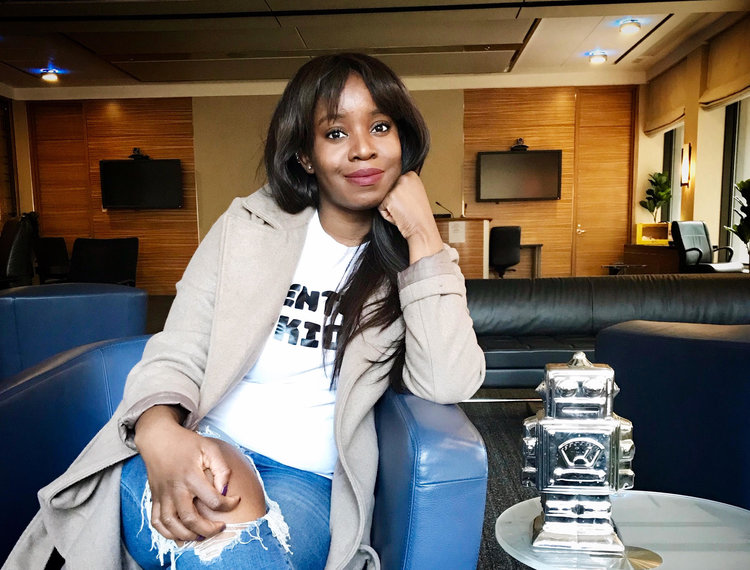 Takara Small is good at many things, but perhaps her greatest strength is being able to compartmentalize microaggressions so she can go on about her day. As someone who runs a non-profit, writes about technology, appears on radio and TV, and hosts two podcasts, she has little time to ruminate on the racism and sexism she encounters.

For instance, at a recent tech conference that she was covering for a leading publication, she was asked odd questions. Where is the bathroom? What floor is the event on? “I was so confused,” says Small. “Then I realized they thought I was staff because the only Black people at the conference were staff workers. They assumed anyone who was Black was not media or not a speaker.”

As a form of self-preservation, she adopts a “forgive but never forget” mantra and channels her energy into creating opportunities for others facing barriers in tech and STEM education.

VentureKids turns common barriers into non-issues. Can’t afford a coding class? It’s free. Don’t have a laptop? They’ll provide you with one. Couldn’t pack a healthy lunch? Food is taken care of. Worried you’ll be the only girl? Classes are gender-balanced. The non-profit has even given students face time with big tech reps from Microsoft, LinkedIn, Google, and Twitter—an encounter that’s super rare if you’re a teenager from rural Ontario.

Says Small: “There’s a misconception that everyone owns a laptop and has access to the internet. That’s not true. In Canada the cost of data is quite high, and the cost of laptops and phones can be prohibitive for some people. I wanted to make sure I was creating free programs that would help people from financially sensitive backgrounds be able to work in an industry that desperately needs workers.”

Desperate is right. Tech leaders have been going on and on about how they want to attract more diverse talent. The research has made it abundantly clear that a diverse workforce leads to more open-mindedness and innovative ideas. According to studies, it’s also just plain profitable. Still, women, Indigenous peoples, some racialized minorities, and LGBTQ+ workers are less likely to be included in the tech economy compared to men and non-racialized workers. Even if they’re in, they don’t always feel included.

Bias is to blame for the lack of diversity, but so is a leaky educational pipeline that limits some people’s exposure to computer science careers at an early age. With VentureKids, Small is determined to patch up parts of that pipeline by showing marginalized kids that they too can be entrepreneurs and tech workers. Often, she’s one of the only people to show them these possibilities.

When LiisBeth’s editor put out a call for pitches about Toronto feminist entrepreneurs advancing social justice, Small was the first person I thought of. Full disclosure: She’s a good friend of mine. We met at Ryerson University as journalism students. Even back then, Small was striving to make a difference, and this made her very, very busy. Now, on top of running her non-profit (she does not pay herself for this work), she hosts two podcasts: I’ll Go First for The Globe and Mail, and Dial Moving for #MoveTheDial where she talks to leaders about all the things that affect underrepresented groups in tech. She also makes her living as a public speaker and journalist for various media outlets including the CBC, The Globe and Mail, and Refinery29.

Small’s upbringing informs much of the work she does today. She was raised by a single mother in Toronto before they moved to Cobourg, Ont. Thanks to a combination of scholarships and financial aid, she was able to move back to Toronto to attend university and eventually break into the tech and media sector. Her journey hasn’t been easy, which makes her more determined to ease the path for the next generation of marginalized folks. “Not everyone can afford to go to college or university. If I really wanted to make a difference, I knew I had to start VentureKids for the kids and families who don’t have the means to pay for coding programs,” says Small.

This past summer, VentureKids launched its first rural-city program thanks to some sweet partnerships with Northeastern University Toronto, Microsoft Canada, the Town of Cobourg, and loyalty program company Points, along with individual donations. As a result, VentureKids secured free space, talented mentors, breakfast and lunch, and roundtrip train tickets for 20 students from eastern Ontario. Every Friday for three months, students aged 14 to 18 took basic web development classes and brainstormed ways technology could solve a specific problem in their community.

A teenager from a rural farm came up with the idea to start an equipment-sharing website where farmers could connect with other farmers to share the cost of expensive equipment and maintenance fees. The idea took off. Now, she’s getting interest from clients outside of her farming family.

Small says students developed several other promising ideas and everyone stuck with the program, despite the up to six-hour roundtrip commute in one day (some had to wake up as early as four in the morning). That tells her underserved youth are hungry for this opportunity. Says Small, “Not every student will create a business that gets funding, and not all startups end up lasting, but the fact that we have students interested in thinking about entrepreneurship is a success.”

Looking to the future, one of VentureKids’s goals is to expand its rural-city program to northern Ontario so that it can reach out to Indigenous and new Canadian students.

Small does a lot of networking, reaching out to volunteers, experienced teachers, and community partners to donate their time, money, space, expertise and even their laptops. Workhaus lends VentureKids a complimentary office space in their downtown Toronto location. Carole Piovesan of INQ Data Law provides free legal help. Says Small, “One thing I have learned is that there are people and allies who are willing to donate their time and services because they care about our mission.”

In the New Year, Small faces the enormous task of putting a volunteer board of directors together. The five directors don’t have to have a tech background per se, but a diverse set of skills and experiences certainly helps.

In the two years since becoming a non-profit founder, Small has learned a few lessons. She’s learned to seek volunteers who are reflective of the people they’re serving and who understand the difficulties of breaking into the tech sector. By contrast, one well-known business leader offering unsolicited advice clearly didn’t get the program when he suggested cutting the free breakfast and diverting the money to other things. Says Small: “That advice doesn’t really match with how we operate. I think it’s well meaning but when you consider the fact that the populations we’re serving don’t have the resources, then it doesn’t really make sense.”

It’s a hard slog, for sure, but Small says the benefit of a non-profit is being able to focus on the communities and youth they serve instead of worrying about making as much money as possible to please investors and shareholders.

“Finding ways to keep yourself optimistic is really important and VentureKids helps with that,” says Small. “It’s a ray of hope and it keeps me excited about the future.”

On top of hosting two podcasts, Takara Small listens to a few herself. Here are her faves:

Harvard Business Review: HBR has a variety of podcasts on leaders in business, women in the workplace, and advice on work dilemmas.

Science Vs: This podcast explores fads and trends to find out what’s fact and what’s not.

If you appreciated this story, please help us work with women journalists who can write more of these stories for fair pay. You can donate here!

This article was made possible due to the generosity of Startup Toronto.