Whoomp. I felt her statement reverberate through my body. I always saw the environment as important, but at that moment, I realized my view was in an abstract and disconnected way. The environment is family—this concept has been colouring my view of the world ever since.

And so, I have been watching the Coastal GasLink pipeline protests in British Columbia through the lens of Environment = Family. Would I be taking the same action if my family was at stake? I look at my son and think, “Yes, I would.” In a heartbeat.

Yet, the current protests of the Wet’suwet’en in British Columbia and the Mohawks of Tyendinaga in Ontario over a natural gas pipeline project and land access in Western Canada seem to be coming across to some in the public—including media, political leaders, RCMP, and Coastal GasLink—as irrational, selfish, and even hysterical. As a woman of colour, I am familiar with that tune. Angry women, like angry Indigenous groups, make people uncomfortable. I have been called irrational, selfish, and stubborn—at times when I simply felt that I was right.

But everyone has varying perspectives on what is right.

Coastal GasLink, the corporate proponent of this multi-billion dollar megaproject, believes its pipeline project is right for its business, its shareholders, and Canada’s economy. It feels that its consultations with First Nations have been sufficient and complete. It has ticked the consultation boxes and secured the permits, so Coastal GasLink believes it is technically right to move ahead with construction.

Both the company and the Wet’suwet’en view each other as irrational and unfair. Reaching mutual understanding and agreement will be a significant challenge when neither can view the other party as fair and reasonable.

Community consultations for mega projects can take years—even decades—for a corporation and its stakeholders to reach a place of mutual understanding and agreement. When such consultations involve marginalized groups such as women and Indigenous peoples, there are additional layers to work through, starting with how we are perceived as stubborn, irrational, and ungrateful. Colonization of Indigenous peoples, patriarchal dominance over women, and commodification of our natural environment by primarily Western cultures are not dissimilar.

Indeed, they may be so closely linked that making progress in one area requires progress in all areas: ending colonization of Indigenous peoples, dismantling patriarchy, and protecting the family that nourishes us—the environment.

Coastal GasLink’s pipeline project has been in the works for years. The company has spent approximately six years conducting impact assessments and consulting stakeholders, including First Nations communities, along the pipeline route. It has secured all the correct government permits. In spite of this, Wet’suwet’en people continue to demonstrate against the pipeline, bringing construction to a standstill and the country at large to their attention.

I have no connection to the Coastal GasLink pipeline or the stakeholders involved. I am a fellow Canadian watching another complicated and sensitive standoff with Indigenous people regarding a resource extraction project.

But I am a professional in the mining industry. I have been in the field, at mine sites and in local villages, facing angry and fearful people opposing mining projects in faraway places such as New Caledonia, Madagascar, and Papua New Guinea—all as geopolitically and socially complex as our country.

I have listened to hopeful community leaders who hold expectations that a mine will bring good, prosperous jobs and lift their community members out of poverty. And I have listened to tearful mothers and fathers from remote regions where economic opportunity is almost non-existent, heard their hopes that we (the mining company) will help clothe, feed, and educate their children.

I have seen companies choose to keep local communities at “arm’s length,” refusing to truly engage and find ways to share benefits of the mine equitably. I have seen some companies barrel through community protests and local unrest, hire their own security, or call in the local army to forcibly remove local citizens and bulldoze local villages, with devastating consequences. These companies never garner local support and often face involuntary shutdowns due to community blockades, attacks, and other forms of protests that drive project costs into the hundreds of millions of dollars.

I have also seen companies completely halt the development of their own multi-billion dollar projects, putting the project on a care and maintenance program (the purpose of C&M is to just have enough funding to “keep the lights on” at site), while continuing to invest corporate money into public consultations, local relationship building, community investments, and forward regional planning—even when the commodity may have tanked in markets. And then, when the price of that commodity rebounds and the project is re-started, that company is better-positioned thanks to the stronger community relationships it has built, garnering trust that a project goal is of mutual benefit for all stakeholders.

A truly sustainable mega-project will aim for a win-win outcome for the local stakeholders and the company. The Coastal GasLink pipeline project seems to be heading for a win-lose. Perhaps the company’s intention was win-win, but somewhere along the way, its stakeholder engagement program failed to recognize and fully engage all the stakeholders involved.

Coastal GasLink may have ticked all the government-required consultation boxes, it may even have gone beyond government requirements, but clearly, that was not enough to mitigate today’s protests resulting in costly equipment sitting idle, the layoff of hundreds of workers and contractors, and a huge economic domino effect across the country with passenger and cargo rail shutdowns.

Many are insisting on government action. But, ultimately, it is Coastal GasLink’s responsibility to do better. It is always the responsibility of the project proponent to know all possible stakeholders and their degree of support or disagreement with the project, recognize and respect the varying hopes and fears, and engage all stakeholders in thorough, comprehensive, and culturally sensitive dialogue and consultations. It owes this due diligence to its business, shareholders, investors, and the country.

There is still a window of opportunity here. As the oil sector is not performing well and the company is bleeding money due to the blockades (not to mention incalculable damage to its corporate reputation), Coastal GasLink could press the pause button on project construction, dismiss the RCMP, and re-engage with its stakeholders. It could listen closer, try to understand each other, search for a common goal of mutual benefit. It may take months or even years, but we need to accept that this is okay, that investing time and energy into building strong relationships in order to help us build more sustainable megaprojects is better for everyone—local communities, the economy, businesses, future generations, and the environment (our family).

Sabrina Dias is the founder and CEO of SOOP Strategies Inc.

We urge the Government of Canada to engage in authentic dialogue with a view towards reaching a withdraw RCMP presence in a way that both maintains surrounding community safety and upholds their commitment to action truth and reconciliation, and to uphold the obligations laid out by the United Nations Declaration on the Rights of Indigenous Peoples (UNDRIP). UNDRIP Article 10 expressly condemns forced removal, including under coercion, and further condemns the use of extra-state actors like corporations.

Anything less is an assault to peaceable coexistence and reconciliation between settlers and Indigenous Peoples in Canada. You can download our full statement here.

For more information on how to support the Wet’suwet’en community, click here. 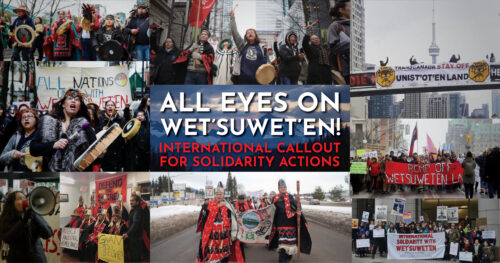 If this article was of value to you, please consider becoming a donor! Or Subscribe!
You will have access to Payments processed through PayPal.
Funding
You can also contribute to our “Sustainability Fund” or an open donation in any amount.