Kate Beaton makes comics about Mary Seacole, Marie Curie, Susan B Anthony, The Brontës, Canadians, superheros, fat ponies, and more. Beaton lampoons historical and literary figures across the board. Her lively drawings and sharp wit have us laughing our way through our midweek. She launched her website Hark! A Vagrant in 2007, which according to the Paris Review receives more than a million hits each month.

More about the illustrator, in her own words:

Kate Beaton was born in Nova Scotia, took a history degree in New Brunswick, paid it off in Alberta, worked in a museum in British Columbia, then came to Ontario for a while to draw pictures, then Halifax, and then New York, and then back to Toronto. Maybe the moon next time, who knows.

The latest Hark! A Vagrant collection, Step Aside Pops is available as a convenient paper bound package. For everyday fun make sure to follow Kate Beaton on Twitter. 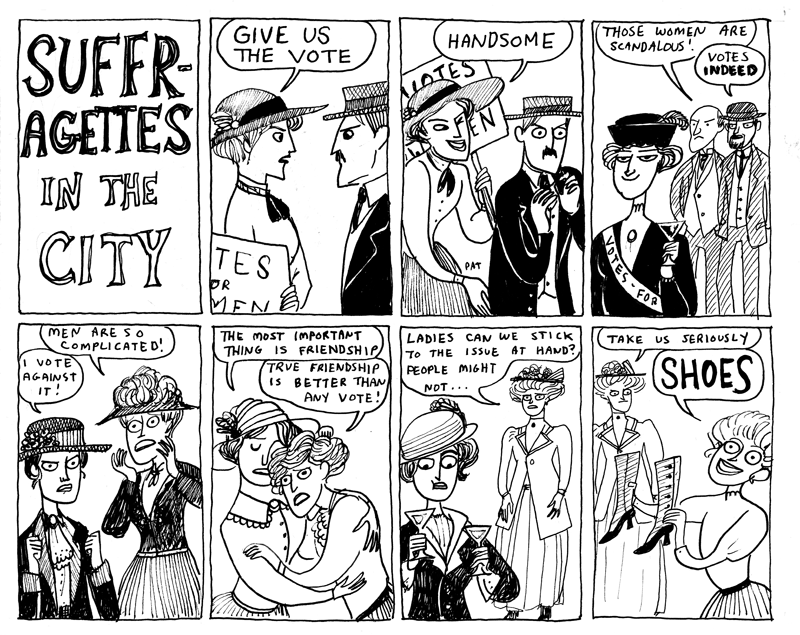 Susan B. Antony may not approve. 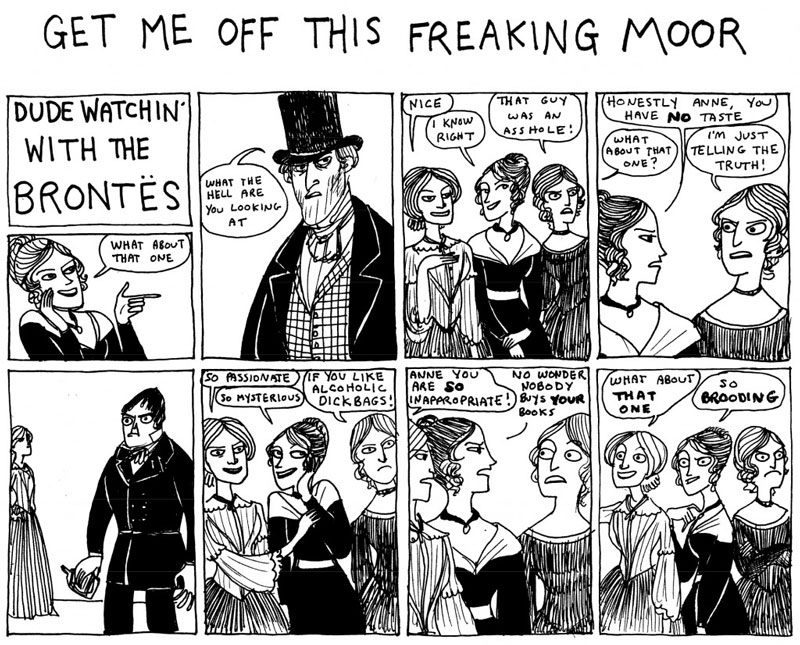 Dude Watchin’ with the Brontes 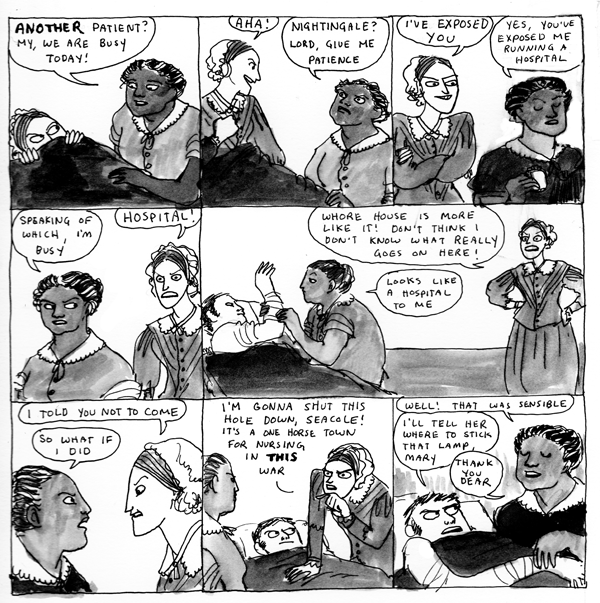 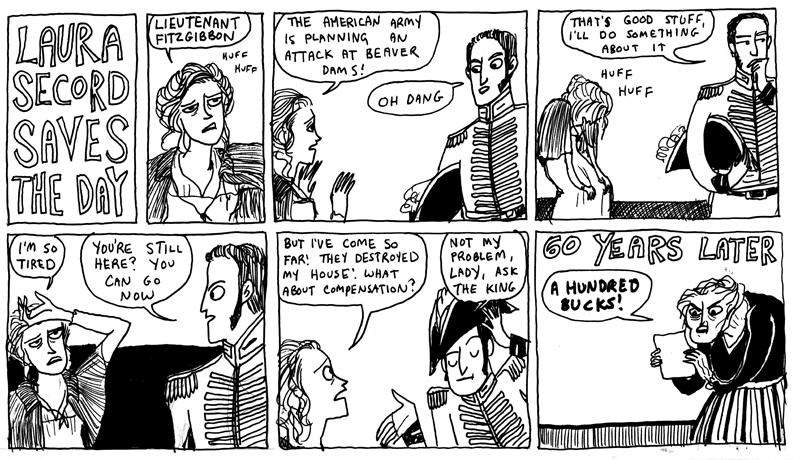 Check your closets for Straw Feminists!


Kate Beaton makes comics about Mary Seacole, Marie Curie, Susan B Anthony, The Brontës, Canadians, superheros, fat ponies, and more. Beaton lampoons historical and literary figures across the board. Her lively drawings and sharp wit have us laughing our way through our midweek. She launched her website Hark! A Vagrant in 2007, which according to the Paris Review receives more than a million hits each month.
More about the illustrator, in her own words:

Kate Beaton was born in Nova Scotia, took a history degree in New Brunswick, paid it off in Alberta, worked in a museum in British Columbia, then came to Ontario for a while to draw pictures, then Halifax, and then New York, and then back to Toronto. Maybe the moon next time, who knows.

The latest Hark! A Vagrant collection, Step Aside Pops is available as a convenient paper bound package. For everyday fun make sure to follow Kate Beaton on Twitter.

Susan B. Antony may not approve.

Dude Watchin’ with the Brontes

Check your closets for Straw Feminists!

You have your big idea, thoughtful marketing research, a well structured business plan, determination. But the big question is, where is your funding coming from? According to research what really sets an entrepreneur apart from others is not their ability to forecast trends or their capacity for hard work, but their access to money.

In a recent Quartz article, Entrepreneurs don’t have a special gene for risk—they come from families with money New York based writer Aimee Groth writes:

When needs are met its easier to be creative. More money means bigger but safer risks, and undoubtedly more successful ventures. “Many other researchers have replicated the finding that entrepreneurship is more about cash than dash,” University of Warwick professor Andrew Oswald told Quartz. “Genes probably matter, as in most things in life, but not much.”

Following your dreams can be a dangerous business. $30,000 is the average cost to launch a startup and the majority of startup funding usually comes from the personal assets and investments of founders.

In a response article on Inc., Minta Zeltlin a business technology writer and the former president of the American Society of Journalists & Authors, agrees that the start-up world favors those who come from privilege, and that access to capital is just one hindrance to making it big.

Other factors to consider are the right education, connections and the right background for your start-up tribe.If you don’t have this preferred cocktail, the startup culture you are trying to penetrate may not be that welcoming.

“You don’t need Startup Castle to know that if you drink Bud rather than craft beer, prefer Nascar to tennis, and like pickup trucks better than hybrids, you’re going to be a bad cultural fit in the start-up world,” Zeltin writes. “If you think that won’t affect your chances for success, just ask the nonwhite, nonmale, nonyoung entrepreneurs who’ve been there.”

Change won’t be easy. Beyond access to money, creating scholarships and bursaries for the non elite, its going to have to be a change in attitudes.

Zeltin talks about startup culture catering to the 1%.”They do things like deliver gourmet meals to people with plenty of money but no time to cook, or shuttle the children of professional parents to ballet and soccer practice at $12 to $15 a ride,” she explains.

“Fubu is a great company that demonstrates the good things that can happen when entrepreneurs don’t fit right into the Silicon Valley mold. But “For Us by Us” can mean the opposite too: Upscale services provided by entrepreneurs from well-to-do backgrounds and aimed at customers whose demographics mirror their own. Until we learn to create a startup culture that welcomes everyone, that’s the best we’re going to get.”

We have reached the point when the conversation of women led entrepreneurship needs to shift beyond the rhetoric of empowerment and awareness. “Deeper contradictions between organizational goals and gender norms require more artful probing,” writes Emily Neilsen Jones and Musimbi Kanyoro in their recent co-authored article Belief- Based Social Innovation: Gender-Lens’ Next Frontier. “

Emily Nielsen Jones is co-founder and president of the Imago Dei Fund which is engaged in promoting human equality, justice, and peace around the world. Dr. Musimbi Kanyoro is president and CEO of the Global Fund for Women the largest publicly supported grant making foundation that advances human rights by investing in women-led organizations. Both co-authors believe that gender-lens investing needs to “move beyond seeing women and girls as a separate programmatic silo in one’s portfolio”, and that  gender norms need to be re-evaluated.

“How can empowerment programs empower someone who is still seen by their culture and their religion as not possessing basic human agency to participate equally in their family, their community, and in all aspects of society?”

This is the elephant in the room.

Jones and Kanyoro believe that private philanthropy plays a critical role in strategically supporting networks of indigenous change agents working to create a deeper shift in gender norms. They call this type of work “belief-based social innovation.” In their article for the Stanford Social Innovation Review they explore global gender progress to date, the barriers to change that women face, and three promising paths for philanthropists seeking to influence beliefs at the root of harmful gender norms.

This weeks reason to smile is imported from Sweden. After the disappointing news that the UK is planning to drop feminism from the politics A-level, we were ecstatic to learn that every 16 years old in Sweden is being given a copy of We Should All Be Feminists, the internationally acclaimed TED talk (later developed into a published essay) by Nigerian novelist, Chimamanda Ngozi Adichie.

The giveaway will be distributed by the Swedish Women’s Lobby and publisher Albert Bonniers. The Guardian reports that the lobby hopes the text will “work as a stepping stone for a discussion about gender equality and feminism.”

Adichie writes in the essay:

“My own definition of a feminist is a man or a woman who says, ‘Yes, there’s a problem with gender as it is today and we must fix it, we must do better. All of us, women and men, must do better.”

Some people ask: ‘Why the word feminist? Why not just say you are a believer in human rights, or something like that?’ Because that would be dishonest. Feminism is, of course, part of human rights in general – but to choose to use the vague expression human rights is to deny the specific and particular problem of gender. It would be a way of pretending that it was not women who have, for centuries, been excluded.”

In her video promoting the giveaway, Adichie says she is a feminist because she wants to live in a world that is more just.

The first copies of We Should All Be Feminists were handed out this week at Norra Real High School in Stockholm.

If you are not lucky enough to count yourself amount the 16 year old Swedish generation, do not fret. We Should All Be Feminists can be found online or at your local bookstore.

Water occupies such a central place in all our lives and though as Canadian’s it is assumed to be in abundance, water is a resource that cannot be taken for granted. Currently Canada’s watersheds are facing a number of issues. From the fight to preserve clean water in the Great Lakes, to the boil-water advisories affecting First Nations communities, to large-scale projects that have sparked public outcry, Canadian policymakers are facing critical questions about the future of a resource that we assume will always be available.

In the overcrowded houses on reserves in remote Northwestern Ontario, clean running water is not available. They are faced with a deadly type of bacteria called MRSA in their water supply. MRSA is a staph infection that causes sores and boils on the skin, and can penetrate the body to infect internal organs. It is resistant to commonly used antibiotics.

Gloria Atlookan is a mother of three and lives at the Neskantaga First Nation, an Ontario fly-in community nearly 500 kilometres north of Thunder Bay. She has seen first hand what drinking the water has done to other children in the community – the sores and rashes spread across their arms, legs, bellies and faces.

Neskantaga is an extreme example of a nationwide problem. At any one time, approximately one in six of Canada’s more than 600 First Nations is under a boil-water advisory, some of which have been in effect for years.

Many First Nations, like Neskantaga, are located on the same bodies of water that served aboriginal populations for thousands of years before filtration was even a possibility. But modern communities are stationary, creating water problems that did not affect the nomadic ancestors of today’s indigenous people. Now even some of the remote parts of Canada are more polluted today than they were centuries ago.

Since the late 19070s, there have been many pledges from the Canadain Government to provide indigenous communities with the same water and sanitation that exists elsewhere in Canada. But efforts to meet these promises have often been met with failure. Galloway explains that “poor construction of pipes and filtration systems, a lack of training for those who are left to run the plants, and a tangled web of jurisdictional issues create a quagmire of issues that prevent the clean water from flowing.”

First Nation communities are frustrated and understandably so. The question is how much longer will families and communities have to live like this? Read the rest of the article here.