Vanessa LeBourdais’ copper-coloured cat-eye sunglasses and hair match the Prius she drives. In early May, she wheeled in to a seaside park in the suburbs of Vancouver, for our interview.

That LeBourdais has suggested we meet in person during the COVID-19 pandemic is odd, especially given that her theatre company is now performing entirely online. But being out in nature is where she thrives, and we sit a generous two metres apart on a log overlooking the ocean.

LeBourdais, 54, is the executive producer of DreamRider Productions, a charity that puts on musical theatre shows to get elementary school kids excited about conservation and the environment.

In “normal” times, the company delivers about eight live shows at schools per week and also produces an interactive digital program, the Planet Protector Academy, designed for teachers to use in the classroom. DreamRider Productions created the digital platform in 2014 to extend its reach from 42,000 kids a year in the Vancouver area to 72,000 per year in cities across Canada and in India. With schools closed due to the COVID-19 pandemic, the company, which employs six people, adapted its digital classroom program to reach children in their own homes.

DreamRider Productions has come a long way since its unexpected beginning in 1998, when LeBourdais and her partner (they married a year later) responded to a classified ad in a local newspaper. The City of Vancouver was looking for someone to put together environmental theatre programming for kids.

Through the play they wrote, which they continued producing for several years, the pair realized the power of turning kids into environmentalists. Parents kept telling them that their children made them change their behaviours after seeing the show.

LeBourdais, drawing on her values, added feminist environmental superhero characters who invite audience members to imagine themselves as superheroes who can also save the planet.

In 2002, the company registered as a non-profit charity. It relies on grants for about half of its revenue, and generates the other half with sales of its programs to cities and schools. In 2019, its operating budget was $500,000. They sell the online classroom program to more than 150 cities in Canada, the United States and India. Pricing, at $10 to $30 per child, depends on a number of factors, including whether the content needs to be customized. The live theatre events performed at schools in the metro Vancouver area are $750 per show.

Cities buy the program as a way to help meet their environmental goals. They recognize that reducing waste, saving electricity or opting for greener commutes requires a culture shift – and that starts with kids. 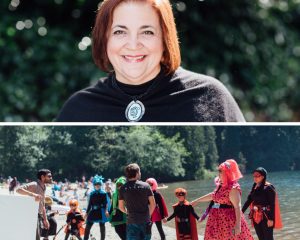 Zooming into the Future

After COVID-19 closed schools, LeBourdais and her employees jumped into action, creating a live Zoom show for children to watch at home. From their homes, two actors, dressed in character, talk to the kids about the environment with great gusto and silly banter, making for perhaps the most compelling Zoom meeting hosts on the internet.

“Kids really experience it like going to Jedi school, they are Planet Protectors,” LeBourdais says.

The hosts ask the kids to come up with their own superhero name and draw themselves as a superhero, and then send in their drawings, which they share on the show the next day. They also get the kids moving, and show the kids how to stand tall and strong like a superhero.

LeBourdais directs the daily show, which is interspersed with clips of pre-recorded highly produced videos starring the company’s planet protector superheroes. When adventures get scary – and touch on the very real issue of environmental collapse — the Zoom hosts jump back on the screen and encourage kids watching at home  — addressed as “Planet Protectors” — to take action.

“We send them on missions every day to change their families and themselves,” explains LeBourdais. This can be as simple as instructing the kids to create “Eat Me First” labels to place on food that’s about to go bad in their family’s fridge.

The hosts also teach kids about proper handwashing and the “Superhero Calming Breath,” to help with COVID-related anxiety. Then they send the superhero kids on a mission to teach it to their families.

“It’s pretty cool,” says LeBourdais. “We’ve got parents saying (to us) ‘I needed that more than my kid did.’”

Their survey results show that 71 per cent of children who participate say the Zoom programming made then feel more calm and relaxed, and 82 per cent said it made them feel more cheerful.

The show is a remarkable to watch, and its success can be attributed to her talented performers and her own directing and leadership philosophy. “We’re not perfectionists, we’re just really into excellence,” she says.

The leading superhero, Esmerelda, knowledgeable and pro-active, models feminist behaviour. Her sidekick, Goober, is a likeable male character who is constantly failing, and then learning from his mistakes. He models vulnerability by talking about his feelings, and Esmerelda proves a compassionate and good listener as she gently guides him towards making things right.

LeBourdais’ marriage echoes some of the power dynamic between Esmerelda and Goober. LeBourdais and her husband – who plays Goober in the shows – were once equal partners in the production company. But ten years ago, LeBourdais stopped performing so she could focus on leading the business and parenting their now teenage daughter.

She struggled to take the reins. “If the genders had been reversed, it would have been a lot easier to navigate at that time, because it’s really going against (traditional) gender dynamics in relationships, and all that (programming) stuff that’s in you that you don’t even know is there.”

On business development decisions, she remembers telling her husband, “Sorry, you don’t get your way, you just gotta trust me.”

Learning to trust herself has been key to LeBourdais’ success and will continue to be crucial, according to her friend and board member Kate Sutherland. “Intuition guides what she does.”

It’s a process LeBourdais isn’t shy talking about. She “feels out” decisions and spends time in nature, allowing answers to come to her. It’s a process that may sound a bit woo-woo, and at times has conflicted with business collaborators who felt she wasn’t rational or strategic enough.

But true to herself, LeBourdais has persisted. 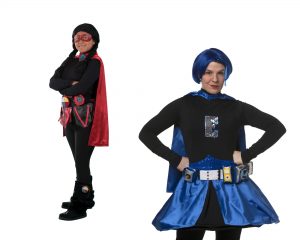 Getting Kids to Deliver the Future

Her independent streak and determination, evident from an early age, run deep in her blood. Her maternal grandmother was disowned by her family after kicking out an abusive husband, and raised four children on her own. Her paternal grandmother, Isabel LeBourdais, was a prominent writer and prisoner-rights activist.

By age seven, LeBourdais was putting on elaborate musical puppet shows for neighbourhood kids. Her mother, Karlene Gheinke, recalls that she would sing loudly everyday while she walked to school. “She sort of went to the tune of a different drummer from quite early on.”

It’s an apt metaphor for LeBourdais, who continues to drum up opportunities for her venture. The Planet Protector Academy has plans to expand further into India. A recent partnership could catapult their program into 200,000 schools in India (by contrast, there are about 10,000 schools in all of Canada).

A TV show in the works also has LeBourdais hopping. “Last Friday I had this amazing call,” she says. “Kids production companies in India, Spain and Ireland – we had this international call – and they all agreed to make this show, and each of them has 200 shows reaching 140 countries, and it’s a bit mind-blowing, the power of the people that were on that call.”

LeBourdais, who calls herself an “experience designer,” will have her work cut out for her. She doesn’t want kids watching the show “like zombies.” Getting kids around the world to become environmental superheroes will depend on being able to spread an embodied practice, she says.

“Because it’s in their bodies, they don’t forget.”